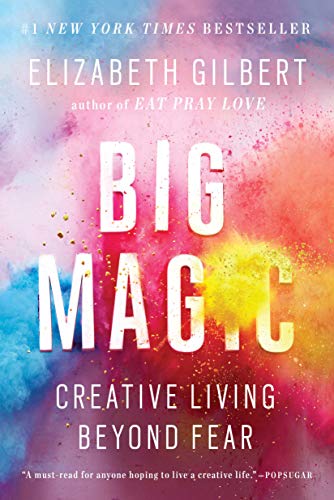 "A must read for anyone hoping to live a creative life... I dare you not to be inspired to be brave, to be free, and to be curious.” —PopSugar

From the worldwide bestselling author of Eat Pray Love and City of Girls: the path to the vibrant, fulfilling life you’ve dreamed of.

Readers of all ages and walks of life have drawn inspiration and empowerment from Elizabeth Gilbert’s books for years. Now this beloved author digs deep into her own generative process to share her wisdom and unique perspective about creativity. With profound empathy and radiant generosity, she offers potent insights into the mysterious nature of inspiration. She asks us to embrace our curiosity and let go of needless suffering. She shows us how to tackle what we most love, and how to face down what we most fear. She discusses the attitudes, approaches, and habits we need in order to live our most creative lives. Balancing between soulful spirituality and cheerful pragmatism, Gilbert encourages us to uncover the “strange jewels” that are hidden within each of us. Whether we are looking to write a book, make art, find new ways to address challenges in our work,  embark on a dream long deferred, or simply infuse our everyday lives with more mindfulness and passion, Big Magic cracks open a world of wonder and joy.

Elizabeth Gilbert is the #1 New York Times bestselling author of Big Magic, Eat Pray Love, and The Signature of All Things, as well as several other internationally bestselling books of fiction and nonfiction. She has been a finalist for the National Book Award, the National Book Critics Circle Award, and the PEN/Hemingway Award. Her latest novel, City of Girls, comes out in June, 2019.

Once upon a time, there was a man named Jack Gilbert, who was not related to me—unfortunately for me.

Jack Gilbert was a great poet, but if you’ve never heard of him, don’t worry about it. It’s not your fault. He never much cared about being known. But I knew about him, and I loved him dearly from a respectful distance, so let me tell you about him.

Jack Gilbert was born in Pittsburgh in 1925 and grew up in the midst of that city’s smoke, noise, and industry. He worked in factories and steel mills as a young man, but was called from an early age to write poetry. He answered the call without hesitation. He became a poet the way other men become monks: as a devotional practice, as an act of love, and as a lifelong commitment to the search for grace and transcendence. I think this is probably a very good way to become a poet. Or to become anything, really, that calls to your heart and brings you to life.

Jack could’ve been famous, but he wasn’t into it. He had the talent and the charisma for fame, but he never had the interest. His first collection, published in 1962, won the prestigious Yale Younger Poets prize and was nominated for the Pulitzer. What’s more, he won over audiences as well as critics, which is not an easy feat for a poet in the modern world. There was something about him that drew people in and kept them captivated. He was handsome, passionate, sexy, brilliant on stage. He was a magnet for women and an idol for men. He was photographed for Vogue, looking gorgeous and romantic. People were crazy about him. He could’ve been a rock star.

Instead, he disappeared. He didn’t want to be distractedby too much commotion. Later in life he reported that he had found his fame boring—not because it was immoral or corrupting, but simply because it was exactly the same thing every day. He was looking for something richer, more textured, more varied. So he dropped out. He went to live in Europe and stayed there for twenty years. He lived for a while in Italy, a while in Denmark, but mostly he lived in a shepherd’s hut on a mountaintop in Greece. There, he contemplated the eternal mysteries, watched the light change, and wrote his poems in private. He had his love stories, his obstacles, his victories. He was happy. He got by somehow, making a living here and there. He needed little. He allowed his name to be forgotten.

After two decades, Jack Gilbert resurfaced and publishedanother collection of poems. Again, the literary world fellin love with him. Again, he could have been famous. Again,he disappeared—this time for a decade. This would be hispattern always: isolation, followed by the publication ofsomething sublime, followed by more isolation. He was likea rare orchid, with blooms separated by many years. Henever promoted himself in the least. (In one of the few interviewshe ever gave, Gilbert was asked how he thoughthis detachment from the publishing world had affected hiscareer. He laughed and said, “I suppose it’s been fatal.”)

The only reason I ever heard of Jack Gilbert was that, quite late in his life, he returned to America and—for motives I will never know—took a temporary teaching position in the creative writing department at the University of Tennessee, Knoxville. The following year, 2005, it happened that I took exactly the same job. (Around campus,they started jokingly calling the position “the Gilbert Chair.”) I found Jack Gilbert’s books in my office—the office that had once been his. It was almost like the room was still warm from his presence. I read his poems and was overcome by their grandeur, and by how much his writing reminded me of Whitman. (“We must risk delight,” he wrote. “We must have the stubbornness to accept our gladness in the ruthless furnace of this world.”)

He and I had the same surname, we’d held the same job, we had inhabited the same office, we had taught many ofthe same students, and now I was in love with his words; naturally enough, I became deeply curious about him. I asked around: Who was Jack Gilbert?

Students told me he was the most extraordinary man they’d ever encountered. He had seemed not quite of this world, they said. He seemed to live in a state of uninterrupted marvel, and he encouraged them to do the same. He didn’t so much teach them how to write poetry, they said, but why: because of delight. Because of stubborn gladness. He told them that they must live their most creative lives as a means of fighting back against the ruthless furnace of this world.

I never met Jack Gilbert myself, and now he is gone—he passed away in 2012. I probably could’ve made it a personal mission to seek him out and meet him while he was living, but I never really wanted to. (Experience has taught me to be careful of meeting my heroes in person; it can be terribly disappointing.) Anyway, I quite liked the way he lived inside my imagination as a massive and powerful presence, built out of his poems and the stories I’d heard about him. So I decided to know him only that way—through my imagination. And that’s where he remains for me to this day: still alive inside me, completely internalized, almost as though I dreamed him up.

But I will never forget what the real Jack Gilbert told somebody else—an actual flesh-and-blood person, a shy University of Tennessee student. This young woman recounted to me that one afternoon, after his poetry class, Jack had taken her aside. He complimented her work, then asked what she wanted to do with her life. Hesitantly, she admitted that perhaps she wanted to be a writer.

So this, I believe, is the central question upon which all creative living hinges: Do you have the courage to bring forth the treasures that are hidden within you?

Look, I don’t know what’s hidden within you. I have no way of knowing such a thing. You yourself may barely know, although I suspect you’ve caught glimpses. I don’t know your capacities, your aspirations, your longings, your secret talents. But surely something wonderful is sheltered inside you. I say this with all confidence, because I happen to believe we are all walking repositories of buried treasure.I believe this is one of the oldest and most generous tricks the universe plays on us human beings, both for its own amusement and for ours: The universe buries strange jewels deep within us all, and then stands back to see if we can find them.

The hunt to uncover those jewels—that’s creative living.

The courage to go on that hunt in the first place—that’s what separates a mundane existence from a more enchanted one.

The often surprising results of that hunt—that’s what I call Big Magic.