Items related to Scientific Discovery from the Brilliant to the Bizarre:...

Fisher, Len Scientific Discovery from the Brilliant to the Bizarre: The Doctor Who Weighed the Soul, and Other True Tales

Scientific Discovery from the Brilliant to the Bizarre: The Doctor Who Weighed the Soul, and Other True Tales 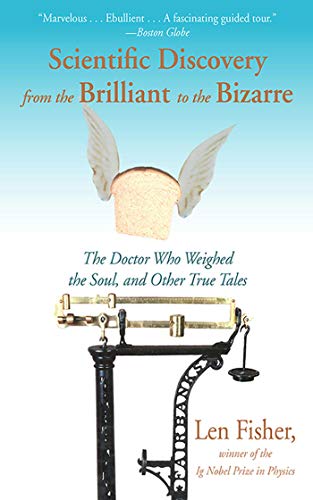 Winner of the IgNobel Prize in physics and the 2004 American Institute of Physics Science Writing Award, Len Fisher showed just how much fun science can be in his enthusiastically praised debut, How to Dunk a Doughnut. In this new work, he reveals that science sometimes takes a path through the ridiculous and the bizarre to discover that Nature often simply does not follow common sense.
One experiment, involving a bed, platform scales, and a dying man, seemed to prove that the soul weighed the same as a slice of bread. But other, no less fanciful experiments and ideas led to the fundamentals of our understanding of movement, heat, light, and energy, and such things as the discovery of electricity, and the structure of DNA; improved engines; and the invention of computers. As in his previous book, Fisher uses personal stories and examples from everyday life, as well as humor, to make the science accessible. He touches on topics from lightning to corsets and from alchemy to Frankenstein and water babies, but he may not claim the last word on the weight of the soul!

Len Fisher is an honorary research fellow in the Department of Physics, University of Bristol, England. The author of more than eighty scientific papers, Fisher has made more than 200 radio and television appearances worldwide.

"Science and common sense often don’t mix," notes Fisher, a research fellow at the University of Bristol famous for studying the science of dunking doughnuts. This new effort is largely about discoveries, such as the wave theory of light and the theory of relativity, that defy reason yet are the bedrock for scientific understanding of the world. To make his various points, Fisher portrays an eclectic mix of scientists and the ridicule heaped on them for their apparently nutty ideas; he also includes genuine quacks and charlatans, like "Doctor James Graham," whose 18th-century specialty was enhancing his customers’ sex lives with electrical devices. Fisher entertains in an airy, lighthearted manner, while also imparting his own philosophy of science, eloquently discussing the borderlines between science and philosophy and faith; in his view, science can’t know everything, and those things that it can’t know "are the province of philosophy and religion." He also tackles the question of whether science can keep us safe. For instance, can it answer questions about the long-term effect of exposure to microwaves? Fisher’s answer is guarded: taking risks is necessary for progress; science’s job is to provide accurate information with which to weigh both the risk of trying something new and the risk of not trying it. Illus. Agent, Barbara Levy.
Copyright © Reed Business Information, a division of Reed Elsevier Inc. All rights reserved.

1. Scientific Discovery from the Brilliant to the Bizarre