Items related to Dead Wrong: Straight Facts on the Country's Most...

Dead Wrong: Straight Facts on the Country's Most Controversial Cover-Ups 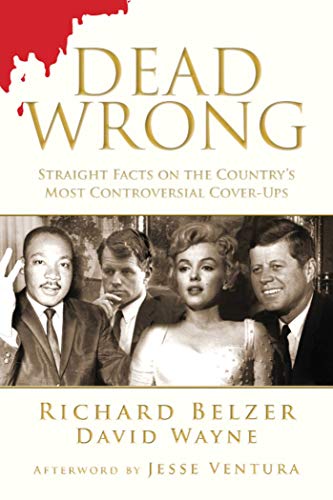 For years, the government has put out hits on people that they found “expendable,” or who they felt were “talking too much,” covering up their assassinations with drug overdoses and mysterious suicides. In Dead Wrong, a study of the scientific and forensic facts of various Government cover-ups, Richard Belzer and David Wayne argue that Marilyn Monroe was murdered, that the person who shot Martin Luther King Jr. was ordered to do so by the government, and examines many other terrifying lies we've been told throughout our country’s history. The extensive research shows how our government has taken matters into its own hands, plotting murder whenever it saw fit.

“Big Brother” is watching you—through the scope of a sniper rifle. Dead Wrong will give you the straight facts on some of the most controversial and famous deaths this country has ever seen. The harsh reality is that our government only tells us what we want to hear, as they look out for their own best interests and eliminate anyone who gets in their way.

Richard Belzer is a stand-up comedian, actor, and author (with David Wayne) of the New York Times bestsellers Hit List and Dead Wrong. He splits his time between France and New York City.

David Wayne is the author of five bestselling books, including Dead Wrong: Straight Facts on the Country's Most Controversial Cover-ups and Hit List: An In-Depth Investigation into the Mysterious Deaths of Witnesses to the JFK Assassination (both written with Richard Belzer). He lives in Honolulu, Hawaii.

Jesse Ventura is the former independent governor of Minnesota. He is also a former US Navy frogman, a professional wrestler, a movie actor, a visiting fellow at Harvard Kennedy School of Government, and the New York Times bestselling author of seven books, including American Conspiracies, 63 Documents the Government Doesn’t Want You to Read, and Don’t Start the Revolution Without Me! He was the host and executive producer of truTV’s Conspiracy Theory with Jesse Ventura, which won the Stony Award from High Times magazine in 2010. He was also the host of the political talk show Off The Grid, which aired on RT America and online at Ora.tv. He has a reputation as a rebel and a freethinker, and he has no qualms about questioning authority. He spends half the year in Baja, Mexico and the other half in his home state of Minnesota.

1. Dead Wrong: Straight Facts on the Country's Most Controversial Cover-Ups

2. Dead Wrong: Straight Facts on the Country's Most Controversial Cover-Ups

3. Dead Wrong: Straight Facts on the Country's Most Controversial Cover-Ups