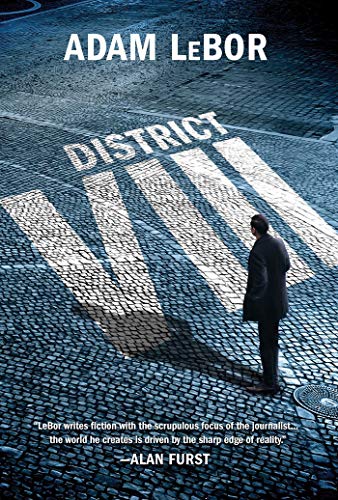 Set in the long, hot Hungarian summer of 2015―and revealing the hidden, criminal world beneath Budapest’s glittering facade―District VIII is the first novel in the new Detective Balthazar Kovacs mystery series.

The dead, however, don't care. So when Balthazar Kovacs, a detective in the city's murder squad, gets a mysterious text message on his phone, he gulps down his coffee and goes to work. The message has two parts: a photograph and an address. The photograph shows a man, in his early thirties, lying on his back with his eyes open, half-covered by a blue plastic sheet. The address is 26 Republic Square, the former Communist Party headquarters, and once the most feared building in the country. But when Kovacs arrives at Republic Square, the body is gone...

Inspired by true events, the novel takes the reader to a hidden city within Budapest and an underworld that visitors never get to see: the gritty back alleys of District VIII; the endemic corruption that reaches deep into government as officials plunder state coffers at will; a rule of law bent to serve the interests of the rich and powerful; the rising power of international organized crime gangs who use the Hungarian capital as a springboard for their European operations; and a troubling look at the ghosts of Communism (and Nazism) that still haunt Budapest.

Adam LeBor lives in Budapest, Hungary, where he writes for The Economist, Newsweek, The New York Times, and The Times (London). He is the author of a number of books, including the Orwell Prize–shortlisted Hitler's Secret Bankers.

“A superior series launch. The premise and the intelligent character construction make this a welcome addition to crime novels about honest, if flawed, cops who fight to expose the truth despite working under corrupt regimes.”
- Publishers Weekly (Starred)

“Kovacs is that classic detective who has a foot in multiple worlds but is not comfortable in or fully accepted by any. A fascinating novel. Bound to thrill readers with its unique look into Budapest’s criminal underworld and government corruption.”
- Criminal Element

Book Description Pegasus Crime, 2018. Condition: New. This is a brand new book! Fast Shipping - Safe and Secure Mailer - Our goal is to deliver a better item than what you are hoping for! If not we will make it right!. Seller Inventory # 1XGGTE000X5D_ns