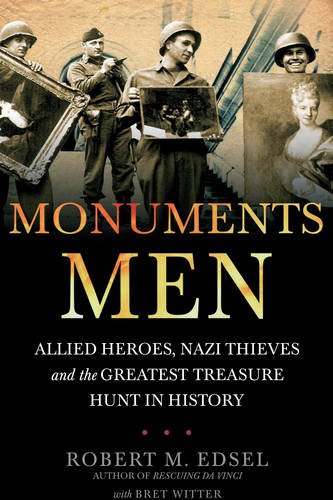 At the same time Adolf Hitler was attempting to take over the western world, his armies were methodically seeking and hoarding the finest art treasures in Europe. The Fuehrer had begun cataloguing the art he planned to collect as well as the art he would destroy: "degenerate" works he despised.
In a race against time, behind enemy lines, often unarmed, a special force of American and British museum directors, curators, art historians, and others, called the Monuments Men, risked their lives scouring Europe to prevent the destruction of thousands of years of culture.
Focusing on the eleven-month period between D-Day and V-E Day, this fascinating account follows six Monuments Men and their impossible mission to save the world's great art from the Nazis.

Robert Edsel began his career in the oil and gas exploration business. In 1996 he moved to Europe to pursue his interests in the arts. Settling in Florence seeing some of the great works, he wondered how all of the monuments and art treasures survived the devastation of World War II. During the ensuing years, he devoted himself to finding the answer. In the process, he commissioned major research that has resulted in this book. Robert also coproduced the related documentary film, The Rape of Europa, and wrote Rescuing Da Vinci, a photographic history of an art heist of epic proportions and the Allied rescue effort. The author lives in Dallas.

Book Description Paperback. Condition: Good. Connecting readers with great books since 1972. Used books may not include companion materials, some shelf wear, may contain highlighting/notes, may not include cdrom or access codes. Customer service is our top priority!. Seller Inventory # S_319094598

Book Description Paperback. Condition: Very Good. Item is in very good condition. If supplemental codes/CDs for textbooks are required please contact us prior to purchasing as they may be missing. Photos are stock pictures and not of the actual item. Seller Inventory # DS-1848091028-2