Items related to The Franklin Story 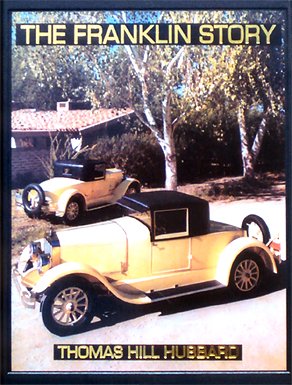 This 324-page, 8˝" x 11" book is a compilation of dozens of articles and newsletters written and published in the middle and late twentieth century by Thomas Hill Hubbard (1925-1993), easily the most skilled of the Franklin restorers and certainly one of the most enthusiastic Franklin collectors. Hubbard restored many classic Franklins now on display in his expansive museum in Tucson, but also for the late William Harrah-some of them still on display in the National Automobile Museum in Reno. Many of the articles were originally published in Air Cooled News, a publication of the H. H. Franklin Club. That organization was founded by Hubbard. The book contains an amazing 583 photographs of historic Franklins (or parts of Franklins), plus seventy-five historical documents, mostly engineering drawings. In addition, there are sixty-eight photos of meticulously restored Franklins reproduced in full, glowing color. Some of the photos feature famous Americans proudly seated in their new Franklins, including Col. Charles A. Lindbergh. The front endsheets have a photograph of the Franklin plant in Syracuse, New York. The picture is sixteen inches wide. The back sheets have an engineering drawing of a 1930 series 145 Franklin, also sixteen inches wide.