Items related to Nonviolent Communication: A Language of Life: Life-Changing... 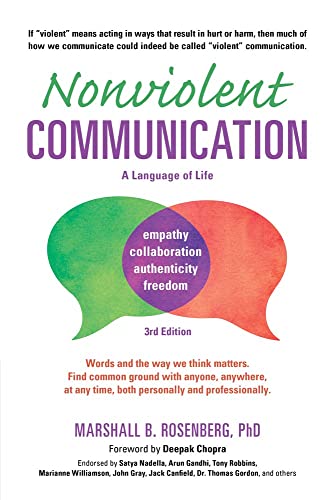 What is Violent Communication?
If “violent” means acting in ways that result in hurt or harm, then much of how we communicate—judging others, bullying, having racial bias, blaming, finger pointing, discriminating, speaking without listening, criticizing others or ourselves, name-calling, reacting when angry, using political rhetoric, being defensive or judging who’s “good/bad” or what’s “right/wrong” with people—could indeed be called “violent communication.”
What is Nonviolent Communication?  Nonviolent Communication is the integration of four things:
· Consciousness: a set of principles that support living a life of compassion, collaboration, courage, and authenticity

· Language: understanding how words contribute to connection or distance

· Communication: knowing how to ask for what we want, how to hear others even in disagreement, and how to move toward solutions that work for all

· Means of influence: sharing “power with others” rather than using “power over others”
Nonviolent Communication serves our desire to do three things:
· Increase our ability to live with choice, meaning, and connection

· Connect empathically with self and others to have more satisfying relationships

· Sharing of resources so everyone is able to benefit

Marshall B. Rosenberg, PhD (1934–2015) founded and was for many years the Director of Educational Services for the Center for Nonviolent Communication, an international peacemaking organization. During his life he authored fifteen books, including the bestselling Nonviolent Communication: A Language of Life (PuddleDancer Press), which has sold more than one million copies worldwide and has been translated into more than 30 languages, with more translations in the works.

Dr. Rosenberg first used the NVC process in federally funded school integration projects to provide mediation and communication skills training during the 1960s. The Center for Nonviolent Communication, which he founded in 1984, now has hundreds of certified NVC trainers and supporters teaching NVC in more than sixty countries around the globe. A sought-after presenter, peacemaker and visionary leader, Dr. Rosenberg led NVC workshops and international intensive trainings for tens of thousands of people in over 60 countries across the world and provided training and initiated peace programs in many war-torn areas including Nigeria, Sierra Leone, and the Middle East.

He worked tirelessly with educators, managers, health care providers, lawyers, military officers, prisoners, police and prison officials, government officials, and individual families. With guitar and puppets in hand and a spiritual energy that filled a room, Marshall showed us how to create a more peaceful and satisfying world.

“Nonviolent Communication connects soul to soul, creating a lot of healing. It is the missing element in what we do.”  —Deepak Chopra, author of How To Know God

“Dr. Rosenberghas brought the simplicity of successful communication into the foreground. No matter what issue you’re facing, his strategies for communicating with others will set you up to win every time.”  —Anthony Robbins,author, Awaken the Giant Within and Unlimited Power

"You have to be able to say, 'Where is this person coming from?' he says. 'What makes them tick? Why are they excited or frustrated by something that is happening, whether it’s about computing or beyond computing?' There’s far more to McCracken’s outstanding piece. Nadella gave him a close and honest look at both himself and Microsoft, and the result is a fun must-read." — Ben Kerschberg, Forbes

"Upon becoming Microsoft CEO, Satya Nadella asked his top executives to read Marshall Rosenberg's Nonviolent Communication. . . . If empathy as a measure of emotional IQ is a predictor of success, then Nadella hit the nail on the head by inculcating the corporate giant with the trait from top to bottom. Why else is empathy important? Microsoft is both a services and a product company, and its offerings have to resonate with users. Nadella states: 'You have to be able to say, "Where is this person coming from? What makes them tick? Why are they excited or frustrated by something that is happening, whether it's about computing or beyond computing?"' — Harry McCracken, Fast Company

"Nadella's time as CEO was initially shaped by Marshall Rosenberg's 'Nonviolent Communication,' which he asked his top executives to read. This was the first indicator to senior leadership that Nadella would not operate like his predecessors" — Satya Nadella, Microsoft CEO, Business Insider

Nonviolent Communication (A Language of Life)

Nonviolent Communication (A Language of Life)