Items related to The Barefoot Book of Stories from the Opera

Husain, Shahrukh; Husain, Shackle Shahrukh The Barefoot Book of Stories from the Opera

The Barefoot Book of Stories from the Opera 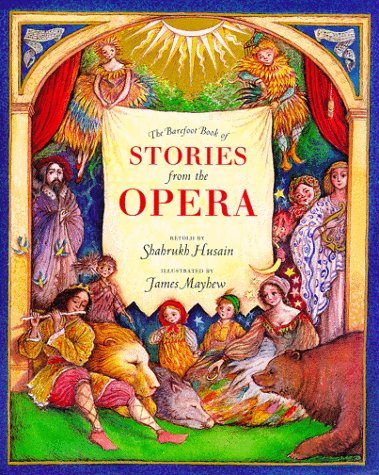 A beautiful collection of seven accessible opera tales includes Britten's "The Little Sweep," Mozart's "The Magic Flute," Rimsky-Korsakov's "Christmas Eve," and others, demystifying the drama behind one of the world's most beloved art forms. 17,000 first printing.

Shahrukh Husain is a folklorist and psychotherapist, specializing in film, women's studies and myth. She has written several books, including Women Who Wear the Breeches (published as Handsome Heroines by Anchor/Doubleday, 1996) chosen for the Independent's Best Books of 1995 list. Shahrukh has also adapted and rewritten books for film production, including Anita Desai's In Custody (Merchant Ivory Productions), which was nominated for a BAFTA award in 1994. James Mayhew has illustrated a variety of picture books for younger children, as well as many of the great classic tales and, in 1994 he received a New York Times Best Illustrated Children's Book of the Year Award for The Boy and the Cloth of Dreams. (Candlewick Press, 1994) James is a passionate opera fan and he has illustrated a number of programs for the Kirov Opera, St. Petersburg, and designed a series of T-shirts for the Metropolitan Opera Guild in New York. Miranda Richardson has many film and television credits to her name, including 'The Hours'; 'Harry Potter and the Goblet of Fire'; 'Sleepy Hollow'; 'Empire of the Sun' and 'The Phantom of the Opera'. Miranda has won two Golden Globe awards for her roles in 'Enchanted April' and 'Fatherland'.

Seven operas, chosen for simplicity and relative absence of death and violence, receive lighthearted retellings, along with brief character and composer notes. The contents encompass nearly 200 years of opera history, from Gluck's 18th-century Orpheus and Eurydice, featuring an unexpectedly happy ending, to Benjamin Britten's pathos-laden The Little Sweep, with selections ranging from somber (Wagner's Flying Dutchman) to giddy (Rimski-Korsakov's Christmas Eve) in between. Husain brightens her plot summaries with flashes of humorthe usually-grim Furies respond to Orpheus's pleas by ``smiling rather rustily,'' while Gretel greets the Crunch Witch's talk of boy soup and stew with ``That's disgusting''and tucks in occasional snatches of lyric or references to singing to remind readers that opera is a musical genre. Mayhew introduces characters and catches each story's high spots with tableaux and individual portraits of gorgeously costumed figures. This is pleasant preparatory reading for a night at the opera, although it is skimpy next to The Random House Book of Opera Stories (1998, not reviewed) or other heftier guides. (Anthology. 8-12) -- Copyright ©1999, Kirkus Associates, LP. All rights reserved.

1. The Barefoot Book Of Stories From The Opera

2. The Barefoot Book of Stories from the Opera

3. The Barefoot Book of Stories from the Opera

4. The Barefoot Book of Stories from the Opera Husain, Shahrukh; Husain, Shackle Shahrukh and Mayhew, James

5. The Barefoot Book Of Stories From The Opera