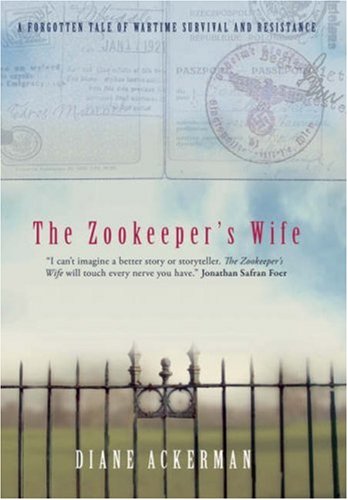 Jan and Antonina Zabinski were Polish Christian zookeepers horrified by Nazi racism, who managed to save over three hundred people. Yet their story has fallen between the seams of history. Drawing on Antonina's diary and other historical sources, bestselling naturalist Diane Ackerman vividly re-creates Antonina's life as "the zookeeper's wife," responsible for her own family, the zoo animals, and their "guests" resistance activists and refugee Jews, many of whom Jan had smuggled from the Warsaw Ghetto.Jan led a cell of saboteurs, and the Zabinski's young son risked his life carrying food to the guests, while also tending to an eccentric array of creatures in the house (pigs, hare, muskrat, foxes, and more). With hidden people having animal names, and pet animals having human names, it's a small wonder the zoo's code name became "The House under a Crazy Star." Yet there is more to this story than a colorful cast. With her exquisite sensitivity to the natural world, Ackerman explores the role of nature in both kindness and savagery, and she unravels the fascinating and disturbing obsession at the core of Nazism: both a worship of nature and its violation, as humans sought to control the genome of the entire planet.

Amazon Significant Seven, September 2007: On the heels of Alan Weisman's The World Without Us I picked up Diane Ackerman's The Zookeeper’s Wife. Both books take you to Poland's forest primeval, the Bialowieza, and paint a richly textured portrait of a natural world that few of us would recognize. The similarities end there, however, as Ackerman explores how that sense of natural order imploded under the Nazi occupation of Poland. Jan and Antonina Zabiniski--keepers of the Warsaw Zoo who sheltered Jews from the Warsaw ghetto--serve as Ackerman's lens to this moment in time, and she weaves their experiences and reflections so seamlessly into the story that it would be easy to read the book as Antonina's own miraculous memoir. Jan and Antonina's passion for life in all its diversity illustrates ever more powerfully just how narrow the Nazi worldview was, and what tragedy it wreaked. The Zookeeper’s Wife is a powerful testament to their courage and--like Irene Nemirovsky's Suite Francaise--brings this period of European history into intimate view. --Anne Bartholomew

Diane Ackerman is the author of many highly acclaimed works of nonfiction and poetry, including A Natural History of the Senses, a book beloved by millions of readers all over the world, and The Zookeeper's Wife, which received the Orion Book Award. She has taught at Columbia and Cornell and has been published in the New York Times, Smithsonian, Parade, the New Yorker, and National Geographic.

Book Description Hardback. Condition: Very Good. The book has been read, but is in excellent condition. Pages are intact and not marred by notes or highlighting. The spine remains undamaged. Seller Inventory # GOR001353427

Book Description Hardback. Condition: Fair. A readable copy of the book which may include some defects such as highlighting and notes. Cover and pages may be creased and show discolouration. Seller Inventory # GOR012076795

Book Description Hardcover. Condition: As New. No Jacket. Pages are clean and are not marred by notes or folds of any kind. ~ ThriftBooks: Read More, Spend Less. Seller Inventory # G1905847467I2N00

Book Description Paperback. Condition: Good. The book has been read but remains in clean condition. All pages are intact and the cover is intact. Some minor wear to the spine. Seller Inventory # GOR003537430

Shipping: US$ 40.33
From United Kingdom to U.S.A.
Destination, rates & speeds

Shipping: US$ 54.58
From United Kingdom to U.S.A.
Destination, rates & speeds