Items related to A Tale of Two Cities 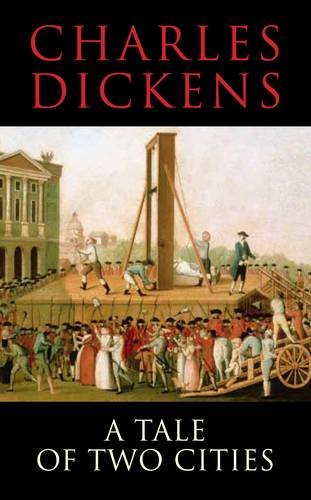 After 18 years of imprisonment in the Bastille, the devoted Doctor Manette is reunited with his daughter, the gentle Lucie, in England. There she captures the hearts of two very different men--Charles Darney, a banished French aristocrat, and Sydney Carton, a well-known English lawyer, both of whom must compete for her love. With a twisting plot of revenge, corruption, and love played out under the shadow of the guillotine, this is one of Dickens' most exciting stories.

Charles Dickens, one of the best known and most read of English writers of Victorian period. He was born into a large comfortable middle class family of Navy clerk in Portsmouth. His father John Dickens later found work in Chatham and Charles, the second of seven children went to the local school there. After moving to Camden Town in London, John Dickens was arrested and sent to debtor's prison and young Charles aged twelve was forced to work at a factory for six shillings a week. He returned to school later after his father's release from prison and became interested in the subject of social reform. He started making contributions to radical newspapers of the time. In 1833 Charles's first short stories were published in the Monthly Magazine under his pen name Boz, followed by more contributions to Morning Chronicle and the London Evening Chronicle. These stories had become very popular and were later published as a book entitled Sketches by Boz. After publication of Oliver Twist and Nicholas Nickleby Dickens had become the most popular writer in Britain and continued to write until his death in 1870.