Items related to The Element -Inth in Greek 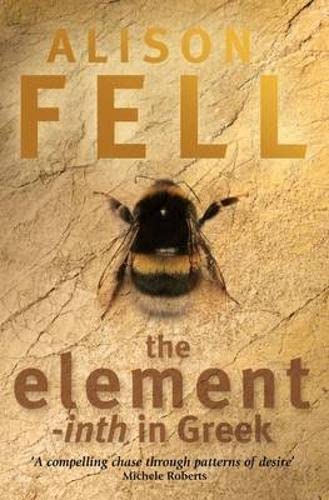 In a small holiday village on the coast of Crete, Ingrid Laurie is researching a biography of the neglected linguist Alice Kober, who laid the basis for the decipherment of the ancient Cretan script Linear B, but died too young to reap the rewards of her work. While Ingrid struggles to decipher the life of the enigmatic scholar, on the outskirts of the village local policeman Yiannis Stephanoudakis discovers a bizarre naked corpse covered in honey and dead bees. When their paths cross in the course of the investigation erotic sparks fly. Mingling detective fiction and biography, modern romance and prehistoric marriage ritual, Alison Fell probes the mysteries of love and language in this intricately-crafted, luminous novel.

About the Author:
Alison Fell was born in Dumfries, Scotland in 1944. She was educated at Dumfries Academy and Edinburgh Art College. She began writing for Scotland Magazine in 1962, and moved to London in 1970, where she co-founded the Woman's Street Theatre Group, later known as 'Monstrous Regiment'. She held the School of English and American Studies Writing Fellowship at the University of East Anglia in 1998. She has published poetry and fiction for both adults and children, and has written for a number of publications, including Spare Rib magazine. She was joint winner of the Boardman Tasker Memorial Prize for her novel Mer de Glace (1991), and held a Royal Literary Fund Fellowship for 2002-3 based at University College London. Other novels include The Pillow Book of the Lady Onogoro (1994), The Mistress of Lilliput (1999), and Tricks of the Light (2003), a powerful portrayal of love in middle age.