Items related to Juggling the Jitters 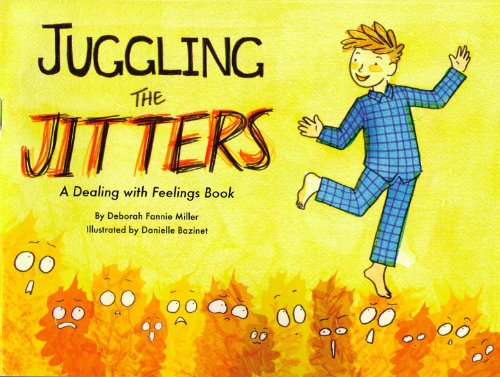 Juggling the Jitters is a Dealing with Feelings children s picture book about anxiety for K 3. TURN WORRY INTO WIGGLES AND GIGGLES Synopsis: Yikes! say the Jitters, and then even more Jitters arrive. When Jacob woke up, everything was great. But when Jacob goes to bed, everything gets JITTERY! That s when the Jitters appear and the troubles begin! You try getting ready for bed with six Jitters in your way and they keep multiplying! This is Jacob s funny and frustrating problem in Juggling the Jitters.

Deborah Fannie Miller is a poet, singer, actor and children s book author who lives in Calgary, Alberta. Miller s poetry has been showcased on CBC Radio, The Women s Television Network, and Vision TV. She has been widely published in literary journals throughout Canada and is in two anthologies: Tributes in Verse and Writing the Terrain: Travelling through Alberta with the Poets. She has had three collections of poetry published. Her first, I Will Burn Candles, was published by Bayeux Arts in 1995, as was her second, Grandmother s Radio, in 2002, co-authored by Susanne Heinz. Vision TV produced Two Worlds Apart? a frequently repeated short film about Grandmother s Radio. Her third collection, Landing at Night, came out in 2008, and her first children s book, Grappling with the Grumblies, came out in April 2009. In March 2011, Grappling with the Grumblies won The Steffie Young Readers Choice Award. Juggling the Jitters comes out in the fall of 2013. Miller is a trained actor and singer with a BFA in Drama from Scripps College in California. She has done post graduate work at the Goodman Theatre School in Chicago, and is a graduate of both the Opera and Music Theatre Programs at the Banff School of Fine Arts. Miller brings performing expertise to all her presentations. Highlights of her singing career include playing Maria in West Side Story at the Banff Summer Arts Festival and originating lead roles in two world premiere Musicals at the Canmore Opera House: Ferret God and Cafe Society with Hummingbird Productions. In 2009, Deborah sang and performed her own poetry in the two women Cabaret Heart Ache and Healing , with Joanne Chapin, a Grammy and Juno nominated singer/actress.

Book Description Frontenac House, Ltd, 2013. Condition: Good. Danielle Bazinet (illustrator). Former Library book. Shows some signs of wear, and may have some markings on the inside. Seller Inventory # 8368414-75