Items related to Ritual Abuse in the Twenty-First Century: Psychological,... 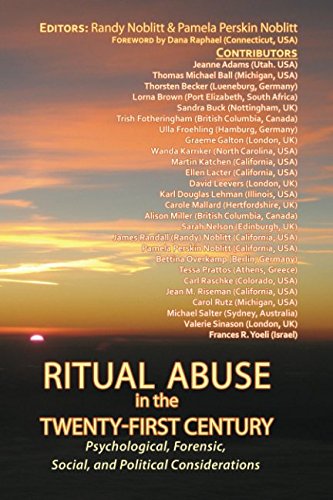 Allegations of ritual abuse are universal and mental health professionals, theologians, law enforcers, scholars, victim advocates, and others struggle to comprehend the enormity of the devastation left in the wake of these heinous acts. Ritual Abuse in the Twenty-first Century addresses the concerns that naturally evolve from any discussion of this phenomenon from the perspectives of professionals, advocates, and survivors from around the world (eight countries, seven states in the U.S.) * How valid are the survivors' stories? * Is there evidence? * What are the consequences of these acts to the individual and society? * Why have these allegations been ignored or discredited whenever they have surfaced? The authors of these chapters respond to these and other questions in an effort to illustrate the constellation of psychological, health, legal, criminal, societal, and spiritual ramifications of ritual abuse. Chapters address current issues including ritually based crime, civil suits involving allegations of ritual abuse, that are universal. The value of understanding ritual trauma for diagnostic and treatment applications is discussed. TABLE OF CONTENTS Editors’ Dedication ...7 Foreword by Dana Raphael (US) ... 9 Introduction by Randy Noblitt (US) ... 11 Chapter 1: Rituals: The Good, the Bad and the Ugly by Randy Noblitt (US) ... 17 Chapter 2: Redefining the Language of Ritual Abuse and the Politics that Dictate It by Randy Noblitt & Pamela Perskin-Noblitt (US) ... 21 Chapter 3: Exploring Commonalities Reported by Adult Survivors of Extreme Abuse: Preliminary Empirical Findings by Carol Rutz, Thorsten Becker, Bettina Overkamp, & Wanda Karriker (US & GER) ... 31 Chapter 4: Guidelines to Differential Diagnosis between Schizophrenia and Ritual Abuse/Mind Control Traumatic Stress by Ellen Lacter & Karl Douglas Lehman (US) ... 85 Chapter 5: Out of the Shadows: Re-envisioning the Debate on Ritual Abuse by Michael Salter (Australia) ... 153 Chapter 6: The Politics of the “False Memory” Controversy: The Making of an Academic Urban Legend by Carl Raschke (US) ... 175 Chapter 7: Interrelated Moral Panics and Counter-panics: The Cult Brainwashing Panic and the False Memory/ Ritual Abuse Moral Panic by Martin Katchen (US) ... 191 Chapter 8: Re-Searching for New Perspectives: Ritual Abuse/Ritual Violence as Ideologically Motivated Crime by Thorsten Becker (GER) ... 235 Chapter 9: Terrorism is the Ritual Abuse of the Twenty-first Century by Frances R. Yoeli & Tessa Prattos (Israel & Greece) ... 259 Chapter 10: The RAINS Network in the UK (Ritual Abuse Information Network and Support) by Sandra Buck (England) ... 305 Chapter 11: Ritual Abuse—A Personal Account and the Unpublished Police Guidelines by Carole Mallard (England) ... 325 Chapter 12: The Orkney “Satanic Abuse Case:” Who Cared About the Children? By Sarah Nelson (Scotland) ... 335 Chapter 13: Our Father Who Art in Hell: A Factual Account by Ulla Fröhling (Germany) ... 353 Chapter 14: Where are We Now? Ritual Abuse, Dissociation, Police and the Media by Valerie Sinason, Graeme Galton, & David Leevers (England) ... 361 Chapter 15: A Therapeutic Relationship: Shifting Boundaries in the Service of Healing by Lorna Brown (South Africa) ... 379 Chapter 16: The Use of Prayer for Inner Healing of Memories and Deliverance with Ritual Abuse Survivors by Thomas Michael Ball (US) ... 411 Chapter 17: Recognizing and Treating Survivors of Abuse by Organized Criminal Groups by Alison Miller (Canada) ... 441 Chapter 18: Ritual Abuse Survivors: Diverse, Yet Similar by Jean M. Riseman (US) ... 477 Chapter 19: Patterns in Mind-Control: A First Person Account by Trish Fotheringham (Canada) ... 489 Chapter 20: Case Studies of Ritual Abuse Survivors: From Abuse to Activism by Jeanne Adams (US) ... 539

Randy and Pam Noblitt have been advocating on behalf of victims of ritual trauma for over two decades. Randy's a clinical psychologist, author, educator, and expert and fact witness. Pam's a victim's advocate, one of Eckerd's 100 Women of 2000, coauthor, presenter, including at the United Nations. Randy's Professor/Director of Cllinical PsyD Program - LA's Alliant International University.