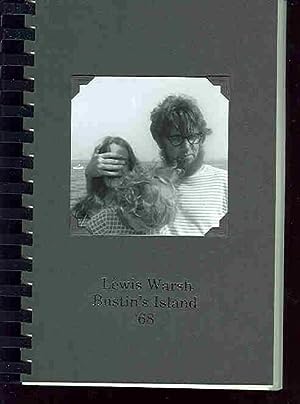 [Colophon]: "Bustin's Island '68 was originally composed and produced by Lewis Warsh as a private manuscript book, a single copy, in 1992. The Granary Books edition is based on the original now housed in the Berg Collection of the New York Public Library. Several photographs have been added, a few from the original are not included here. Text and photographs (c) Lewis Warsh. The black and white photographs were editioned, from the original 126 film at the Rocky Mountain Film Lab in Aurora, Colorado then hand-mounted by Jill Jevne. The text was composed in New Century Schoolbook in Quark at Granary and printed letterpress on Somerset Book Heavyweight by Joe Elliot at Soho Letterpress. The edition consists of seventy copies: A-T hors commerce; 1-50 are for sale. This is copy 28 [signed] Lewis Warsh." Size: 6 3/8 in. x 8 5/8 in., [72] unnumbered pages, with printed text on one side only, and with twenty, mounted, black & white photographs, and one photograph on the outer front cover (of Ted Berrigan, Kate Berrigan & Anne Waldman), other images, according to the Photo Key, are of: Sandy Berrigan, Lewis Warsh, Joanne Kyger, Jack Boyce, Angela Clark, Harry & Ray Warsh; with photographs taken by Lewis Warsh, Jim Koller, Anne Waldman, Ted Berrigan & Tom Clark. Specially constructed black plastic spiral binding, with black paste-board covers, mounted photo on front cover, with titling in silver under the photo. Scarce item. Seller Inventory # ABE-563610062