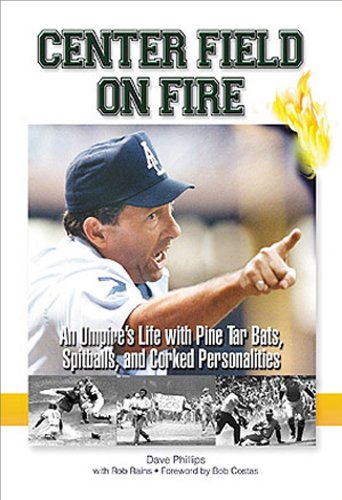 From Detroit's Disco Demo night to Albert Bell's corked bat, in his 32 years as a Major League Umpire he has seen alot SIGNED BY DAVE PHILLIPS. Seller Inventory # 487

Whether you consider it a blessing or a curse, Dave Phillips was major league baseball’s version of Forrest Gump throughout his remarkable 32-year umpiring career. Few people, if any, have been involved in as many historic, controversial, and just plain peculiar incidents on a baseball diamond. Among the more notable games Phillips worked was the infamous Disco Demolition Night in Chicago in 1979. He emerged from the umpires’ dressing room expecting to start the second game of a doubleheader, only to find that thousands of fans had converged on the field and portions of the outfield were in flames due to a radio station–sponsored promotion gone bad. Phillips was also in uniform during 1994’s "Batgate" (which also took place at Chicago’s Comiskey Park), during which he confiscated Albert Belle’s suspect bat and subsequently became the victim of one of baseball’s most notorious crimes.

Phillips had legendary run-ins with the likes of Earl Weaver and Billy Martin—the most memorable of which came in the George Brett Pine Tar Game in 1983—and he was the first umpire to catch famed spitballer Gaylord Perry in the act. In Center Field on Fire, Phillips recounts these and dozens of other amazing stories from his unique perspective. His tales are not only wildly entertaining and humorous, but also provide an insider’s glimpse into some of baseball’s most prominent and controversial personalities over the last half century. Phillips reveals telling anecdotes about Pete Rose, Reggie Jackson, Sparky Anderson, Bud Selig, and many more of the game’s heavy hitters, and he offers informed opinions about important issues in baseball today, such as labor relations and drug use.

One of the most talented and respected professionals in the business during his long tenure, Phillips accurately portrays the life of an umpire. Following in his father’s footsteps, he toiled in the minor leagues for several years before getting his shot in the majors. Once there, he learned how to live with the constant travel, stress, conflict, and never ending ire from fans, players, coaches, and managers.

Center Field on Fire provides a candid and humorous look inside the fascinating life of a true major leaguer.

For the last 25 years we specialize in rare and/or autographed baseball books. Everything we sell is guarunteed. Photos available at your request.


CHECKS, MONEY ORDERS ONLY OR PAYPAL (payable to kylelsqbooks@gmail.com)
POSTAL CHARGES will be assessed at time of purchase. Choices include book rate
(10 to ? days), priority (2 to 5 days), second day, or overnight is available. INSURANCE
is highly recommended and exact charges will be used. Insurance must be specifically requested
GUARANTEE - ALL PURCHASES ARE FULLY RETURNABLE FOR ANY REASON FOR 10 DAYS AFTER
RECEIVING THE ITEM