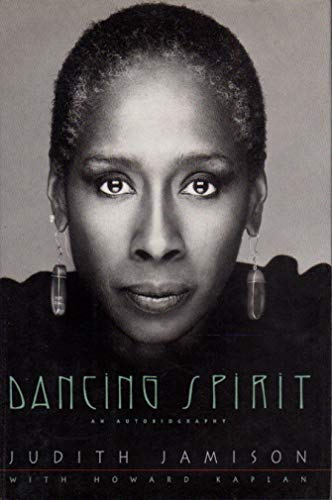 Quantity: 1
View all  copies of this book
Buy Used
Price: US$ 75.00 Convert Currency
Shipping: US$ 5.00 Within U.S.A. Destination, rates & speeds
Add to basket

(1st, 1st) Large, sturdy book, dark gray cloth spine, gray boards, bright silver lettering on spine, red color inside covers and adjacent end papers, 272 pages plus short bibliography, many photographs. On frontispiece page opposite photo on title page in black ink: "To Mary, Thanks. Judith Jamison. 5/5/94." DJ glossy beneath mylar in shades of gray and black, a photo portrait of Jamison on front and spine, dancing in white gown at top back photo, praise from Marion Wright Edelman. DJ and book, both As New. Seller Inventory # 47200

Judith Jamison is, in every sense, a towering  figure. Her commanding physical presence and  extraordinary technique have made her not only a  superstar of American dance and an innovator in her field,  but also an inspiration to African Americans, to  women, and to people of all origins around the  world. Last November, Doubleday published  Dancing Spirit, this remarkable woman's  autobiography. Now, with Anchor's paperback  publication, an even wider audience can trace the steps of  her career: her early years in Philadelphia, where  she began studying dance at the age of six, her  discovery by Agnes de Mille; years of frustration  and struggle in a field that favored petite, fair,  White women; her legendary collaboration with Alvin  Ailey; her work on Broadway in the musical  Sophisticated Ladies ; the formation of  her own company, the Jamison Project, and her  retum to the Alvin Ailey American Dance Theater as  artistic director after its founder's death in 1989.  Dancing Spirit contains vivid  portraits of many artists Jamison has worked with  including Agnes de Mille, Alvin Ailey, Jessye Norman,  Geoffrey Holder, Carmen de Lavallade, and Mikhail  Baryshnikov, to name only a few. And Jamison talks  frankly about the price exacted by a dancer's  nomadic life--rootlessness, fleeting relationships,  the obsession with physical beauty. Illustrated with  sixty photographs, Dancing Spirit  is a candid and immediate self-portrait of a  unique American artist whose work has left an indelible  mark on the world of  dance.
From the Trade Paperback edition.

"This is a book about passion and will, about dance, about black history, about spirituality, about womanhood, about holding a vision, about carrying on."--The Washington Post

"Dancing Spirit is more than a mere collection of remembrances of a great performing career. It is also an inspirational look at a woman who never lost her focus."--Chicago Sun-Times

Selling by mail order directly to customers, bookdealers and collectors from an inventory of more than 40,000 books, strong in literature, history, Native American and Vietnam Conflict. All defects seen are stated: a microtear or micronick is a defect smaller than 1/16 of an inch, but visible.


Check or money order, or Paypal. Buyer pays postage--usually 4.00 to 5.00 for sales inside U.S.. $25 or more for international sales, minimum, due to postal hikes and inaccurate U.S. Postal Service rate calculators. All defects noted. Book returnable if not as described.