Items related to The Republic of Conscience: **Signed** 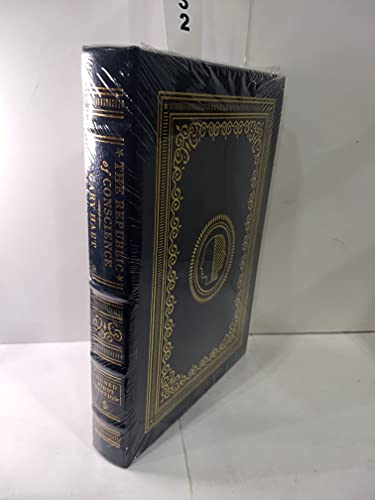 The Republic of Conscience: **Signed**

Quantity: 1
View all  copies of this book
Buy Used
Price: US$ 65.00 Convert Currency
Shipping: US$ 5.00 Within U.S.A. Destination, rates & speeds
Add to basket

SIGNED by the AUTHOR on the Title page. Signature only. A First edition, First printing. Book is in Fine condition. Boards are clean, not bumped. Fore edges are clean. Interior is clean and legible. Not remaindered. Dust Jacket is in Fine condition. Not chipped or crinkled. Not price clipped. Dust Jacket is covered by Mylar Brodart. Thanks and Enjoy. All-ways well boxed, All-ways fast service. Thanks. Seller Inventory # 023464

Title: The Republic of Conscience: **Signed**

Former Senator Gary Hart’s The Republic of Conscience is a meditation on the growing gap between the founding principles of the United States Constitution and our current political landscape.

Going back as early as 400 BC, the idea of a true republic has been threatened by narrow, special interests taking precedence over the commonwealth. The United States Constitution was drafted to protect against such corruption, but as Gary Hart details in The Republic of Conscience, America is nowhere near the republic it set out to be almost 250 years ago, falling to the very misconduct it hoped to avoid.

In his latest book, the former Colorado Senator and presidential contender describes ‘the increasing gap between purpose and performance’ in America, emphasizing how the sense of national interest has become distorted and diluted over time. Focusing on the years after World War II, Hart tackles major American institutions—the military, the CIA, Congress—and outlines how these establishments have led the country away from its founding principles, not closer to them.

Full of original and incisive analysis, The Republic of Conscience is Hart’s examination and remedy for the millions of Americans who feel jaded, confused, and disappointed by their current government. A testament to Hart’s political faith in the founding fathers, this book is one citizen’s attempt to recapture the Republic, and a timely reminder for the next July 4th holiday.

Gary Hart is an American politician and a former Colorado senator, serving in Congress from 1975 to 1987. Since retiring from the Senate, Hart resumed his private law practice and has written several books on U.S. history and politics. In 2014, President Barack Obama named Hart as the new United States Special Envoy for Northern Ireland.

All-Ways Fiction specializes in Signed First Editions -- Mysteries, Science Fiction, Fantasy, Fiction, and First Editions not signed. etc... " A picture is worth a thousand words" -- were happy to send scans as desired. We ship daily in well packaged boxes - not padded envelopes. We have not listed all of our inventory so please feel free to email your inquiries. Visits by Appointments only. WANTED: We are always interested in purchasing individual or collections of fine books for resale.

Books may be returned if not as described within 10 days of receipt.

Books may be reserved by Phone/Fax or email
and will be held for one week pending receipt of payment.
Inquiries / orders can be sent
by Email - Allwaysfiction@msn.com

BOOK DESCRIPTIONS: Are made to the best of ...