Items related to The Last Quarter of the Moon

Zijian, Chi The Last Quarter of the Moon

The Last Quarter of the Moon 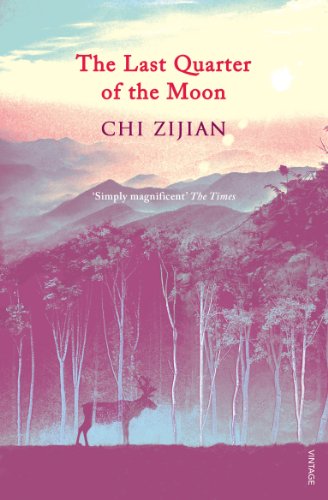 In this sweeping epic, full of love and loss, a woman from one of the last remote reindeer-herding tribes of northeastern China tells the story of her family and the last century of her country's history.
'A long-time confidante of the rain and snow, I am ninety years old. The rain and snow have weathered me, and I too have weathered them'.

At the end of the twentieth-century an old woman sits among the birch trees and thinks back over her life, her loves, and the joys and tragedies that have befallen her family and her people. She is a member of the Evenki tribe who wander the remote forests of north-eastern China with their herds of reindeer, living in close sympathy with nature at its most beautiful and cruel.

An idyllic childhood playing by the river ends with her father's death and the growing realisation that her mother's and uncle's relationship is not as simple as she thought. Then, in the 1930s, the intimate, secluded world of the tribe is shattered when the Japanese army invades China. The Evenki cannot avoid being pulled into the brutal conflict which marks the first step towards the end of their isolation...

In The Last Quarter of the Moon, prize-winning novelist Chi Zijian, creates a dazzling epic about an extraordinary woman bearing witness not just to the stories of her tribe but also to the transformation of China.

CHI ZIJIAN was born in Mohe in 1964. She started writing while at school and had her first story published in Northern Literature magazine when she was at college. She is the only writer to have won the Lu Xun Literary Award three times. The Last Quarter of the Moon also won the Mao Dun Literary Award. Her work has been translated into many languages.

"Zijian has an extraordinary gift for storytelling and her steely narrator is a true heroine, surviving war and encroaching modernity. Simply magnificent" -- Kate Saunders * Times * "An atmospheric modern folk-tale, the saga of the Evenki clan of Inner Mongolia - nomadic reindeer herders whose traditional life alongside the Argun river endured unchanged for centuries... This is a fitting tribute to the Evenki by a writer of rare talent" * Financial Times * "Chi Zijian's beautifully realised novel offers a detailed portrait of a way of life hard to imagine today...It was surely no easy task to make this ancient, wise narrator sound convincing in English. Bruce Humes's skilful translation is pitch-perfect" * Independent * "This is a beautifully simple book offering a detailed yet unromantic picture ... The setting is spectacularly rendered and this idyllic corner of China is as prominent as any other character in the book" * We Love This Book * "Masterfully told, with simplicity and empathy, in a direct and credible voice that not only feels unlike a translation, but unlike a fiction at all" * Independent on Sunday *

1. LAST QUARTER OF THE MOON, THE