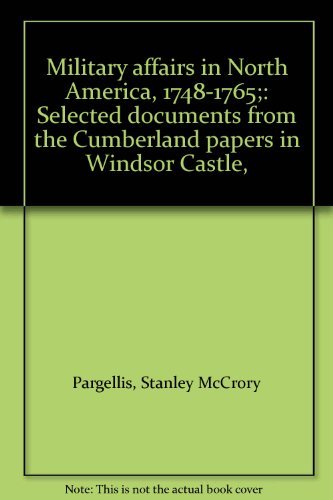 Excerpt from Military Affairs in North America, 1748-1765: Selected Documents From the Cumberland Papers in Windsor Castle

William augustus, Duke of Cumberland (1721 the second son of George II, from whose private papers the documents in this book are selected, was captain general of the British army from 1745 to 1757. Highest ranking officer in the military hierarchy, his business dealt with everything which concerned the running of the army as an effective mili tary unit, with the selection and promotions of its officers, with its discipline and drill, with the coordination of the various departments and boards which equipped, supplied, clothed, transported, mustered, paid, and quartered it. His connection with America, therefore, was with those units of the army which served there. A shadowy and incom petent figure he has appeared to most writers on the war in the colonies; these documents give the range of his interests and the extent of his influence.

Book Description Archon Books, 1969. Condition: Good. Reprint Edition. Former Library book. Shows some signs of wear, and may have some markings on the inside. Seller Inventory # GRP81383345

Book Description Archon Books, Hamden, Connecticut, 1969. Hard Cover. Condition: Fine. Dust Jacket Condition: Very Good. Collection of papers from William Augustus, Duke of Cumberland, who was captain general of the British Army from his victorious campaign against the Jacobites through the Seven Years War. Valuable resource on the logistics and operations of the British Army during the Seven Years War (French and Indian War) in America. Red cloth with gilt spine title. Light wear to head and base of spine. Contents clean and bright with six black and white maps, including fold-outs. Price-clipped dust jacket lightly edgeworn and soiled; in mylar cover. Size: 8vo - over 7ľ" - 9ľ" tall, 514 pp. Seller Inventory # 005293