Items related to A Small Town in Germany

A Small Town in Germany 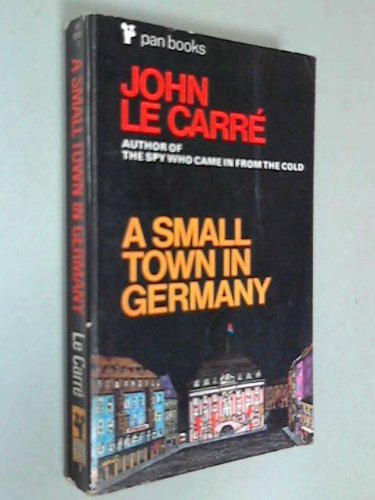 A Small Town in Germany

John le CarrÉ was born in 1931. His third novel, The Spy Who Came in From the Cold, secured him a worldwide reputation, which was consolidated by the acclaim for his trilogy: Tinker, Tailor, Soldier, Spy; The Honorable Schoolboy, and Smiley's People. His novels include The Little Drummer Girl, A Perfect Spy, The Russia House, Our Game, The Taileor of Panama, and Single & Single. John le CarrÉ lives in Cornwall.

"Why don't you get out and walk? I would if I was your age. Quicker than sitting with this scum."

"I'll be all right," said Cork, the albino cypher clerk, and looked anxiously at the older man in the driving seat beside him. "We'll just have to hurry slowly," he added in his most conciliatory tone. Cork was a cockney, bright as paint, and it worried him to see Meadowes all het up. "We'll just have to let it happen to us, won't we, Arthur?"

"I'd like to throw the whole bloody lot of them in the Rhine."

"You know you wouldn't really."

It was Saturday morning, nine o'clock. The road from Friesdorf to the Embassy was packed tight with protesting cars, the pavements lined with photographs of the Movement's leader, and the banners were stretched across the road like advertisements at a rally: "The West has deceived us; Germans can look East without shame." "End the Coca-Cola culture now!" At the very centre of the long column sat Cork and Meadowes, becalmed while the clamour of horns rose all round them in unceasing concert. Sometimes they sounded in series starting at the front and working slowly back, so that their roar passed overhead like an aeroplane sometimes in unison, dash dot dash, K for Karfeld our elected leader; and sometimes they just had a free for all, tuning for the symphony.

"What the hell do they want with it then? All the screaming? Bloody good haircut, that's what half of them need, a good hiding and back to school."

"It's the farmers," Cork said, "I told you, they're picketing the Bundestag."

"Farmers? This lot? They'd die if they got their feet wet, half of them. Kids. Look at that crowd there then. Disgusting, that's what I call it."

To their right, in a red Volkswagen, sat three students, two boys and a girl. The driver wore a leather jacket and very long hair, and he was gazing intently through his windscreen at the car in front, his slim palm poised over the steering wheel, waiting for the signal to blow his horn. His two companions, intertwined, were kissing deeply.

"They're the supporting cast," Cork said. "It's a lark for them. You know the students' slogan: 'Freedom's only real when you're fighting for it.' It's not so different from what's going on at home, is it? Hear what they did in Grosvenor Square last night?" Cork asked, attempting once again to shift the ground. "If that's education, I'll stick to ignorance."

But Meadowes would not be distracted.

"They ought to bring in the National Service," he declared, glaring at the Volkswagen. "That would sort them out."

"They've got it already. They've had it twenty years or more." Sensing that Meadowes was preparing to relent, Cork chose the subject most likely to encourage him. "Here, how did Myra's birthday party go, then? Good show was it? I'll bet she had a lovely time."

But for some reason the question only cast Meadowes into even deeper gloom, and after that Cork chose silence as the wiser course. He had tried everything, and to no effect. Meadowes was a decent, churchy sort of bloke, the kind they didn't make any more, and worth a good deal of anybody's time; but there was a limit even to Cork's filial devotion. He'd tried the new Rover which Meadowes had bought for his retirement, tax free and at a ten per cent discount. He'd admired its build, its comfort and its fittings until he was blue in the face, and all he'd got for his trouble was a grunt. He'd tried the Exiles Motoring Club, of which Meadowes was a keen supporter; he'd tried the Commonwealth Children's Sports which they hoped to run that afternoon in the Embassy gardens. And now he had even tried last night's big party, which they hadn't liked to attend because of Janet's baby being so near; and as far as Cork was concerned, that was the whole menu and Meadowes could lump it. Short of a holiday, Cork decided, short of a long, sunny holiday away from Karfeld and the Brussels negotiations, and away from his daughter Myra, Arthur Meadowes was heading for the bend.

"And Guest Keen are down three."

Cork had resolutely invested in non-British stock, but Meadowes preferred to pay the price of patriotism.

"They'll go up again after Brussels, don't you worry."

"Who are you kidding? The talks are as good as dead aren't they? I may not have your intelligence but I can read, you know."

Meadowes, as Cork was the very first to concede, had every excuse for melancholy, quite apart from his investments in British steel. He'd come with hardly a break from four years in Warsaw which was enough to make anyone jumpy. He was on his last posting and facing retirement in the autumn, and in Cork's experience they got worse, not better, the nearer the day came. Not to mention having a nervous wreck for a daughter: Myra Meadowes was on the road to recovery, true enough, but if one half of what they said of her was to be believed, she'd got a long way to go yet.

Add to that the responsibilities of Chancery Registrar -- of handling, that is, a political archive in the hottest crisis any of them could remember -- and you had more than your work cut out. Even Cork, tucked away in Cyphers, had felt the draught a bit, what with the extra traffic, and the extra hours, and Janet's baby coming on, and the do-this-by-yesterday that you got from most of Chancery; and his own experience, as he well knew, was nothing beside what old Arthur had had to cope with. It was the coming from all directions, Cork decided, that threw you these days. You never knew where it would happen next. One minute you'd be getting off a Reply Immediate on the Bremen riots, or tomorrow's jamboree in Hanover, the next they'd be coming back at you with the gold rush, or Brussels, or raising another few hundred millions in Frankfurt and Zurich; and if it was tough in Cyphers, it was tougher still for those who had to track down the files, enter up the loose papers, mark in the new entries and get them back into circulation again...which reminded him, for some reason, that he must telephone his accountant. If the Krupp labour front was going on like this, he might take a little look at Swedish steel, just an in-and-outer for the baby's bank account...

"Hullo," said Cork brightening. "Going to have a scrap, are we?"

Two policemen had stepped off the kerb to remonstrate with a large agricultural man in a Mercedes Diesel. First he lowered the window and shouted at them; now he opened the door and shouted at them again. Quite suddenly, the police withdrew. Cork yawned in disappointment.

Once upon a time, Cork remembered wistfully, panics came singly. You had a scream on the Berlin corridor, Russian helicopters teasing up the border, an up-and-downer with the Four Power Steering Committee in Washington. Or there was intrigue: suspected German diplomatic initiative in Moscow that had to be nipped in the bud, a suspected fiddle on the Rhodesian embargo, hushing up a Rhine Army riot in Minden. And that was that. You bolted your food, opened shop, and stayed till the job was done; and you went home a free man. That was that; that was what life was made of; that was Bonn. Whether you were a dip like de Lisle, or a non-dip behind the green baize door, the scene was the same; a bit of drama, a lot of hot air, then tickle up the stocks and shares a bit, back to boredom and roll on your next posting.

Until Karfeld. Cork gazed disconsolately at the posters. Until Karfeld came along. Nine months, he reflected -- the vast features were plump and lifeless, the expression one of flatulent sincerity -- nine months since Arthur Meadowes had come bustling through the connecting door from Registry with the news of the Kiel demonstrations, the surprise nomination, the student sit-in, and the little bit of violence they had gradually learnt to expect. Who caught it that time? Some Socialist counter-demonstrators. One beaten to death, one stoned...it used to shock them in the old days. They were green then. Christ, he thought, it might have been ten years ago; but Cork could date it almost to the hour.

Kiel was the morning the Embassy doctor announced that Janet was expecting. From that day on, nothing had ever been the same.

The horns broke wildly into song again; the convoy jerked forward and stopped abruptly, clanging and screeching all different notes.

"Any luck with those files then?" Cork enquired, his mind lighting upon the suspected cause of Meadowes' anxiety.

"No, the trolley has not turned up."

Ball-bearings, Cork thought suddenly: some nice little Swedish outfit with a get-up-and-go approach, a firm capable of moving in fast...two hundred quid's worth and away we all go...

"Come on Arthur, don't let it get you down. It's not Warsaw you know: you're in Bonn now. Look: know how many cups they're shy of in the canteen, just on the last six weeks alone? Not broken, mind, just lost: twenty-four."

"Now who wants to pinch an Embassy cup? No one. People are absent-minded. They're involved. It's the crisis, see. It's happening everywhere. It's the same with files."

"Nor's file trolleys," Cork pleaded, "if it comes to that. Nor's the two-bar electric fire from the conference room which Admin are doing their nut about. Nor's the long-carriage typewriter from the Pool, nor -- listen Arthur, you can't be blamed, not with so much going on; how can you? You know what dips are when they get to drafting telegrams. Look at de Lisle, look at Gaveston: dreamers. I'm not saying they aren't geniuses but they don't know where they are half the time, their heads are in the clouds. You can't be blamed for that."

"I can be blamed. I'm responsible."

"All right, torture yourself," Cork snapped, his last patience gone. "Anyway it's Bradfield's responsibility, not yours. He's Head of Chancery; he's responsible for security."

With this parting comment, Cork once more fell to surveying the unprep...