Items related to Fundamentals of Astrodynamics and Applications (Space... 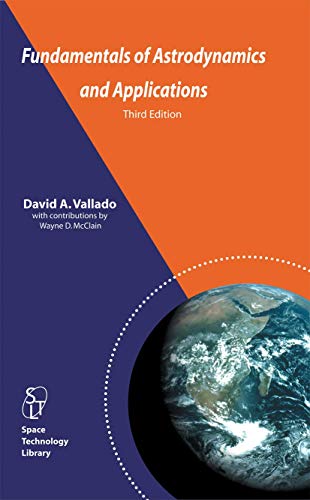 This book is rapidly becoming the standard astrodynamics reference for those involved in spaceflight. The second edition contains new topics that include ground illumination calculations, Moon rise and set, and a listing of relevant Internet sites. There is an improved and expanded discussion of coordinate systems, orbit determination, and differential correction. All of the software routines described are now available for free in FORTRAN, PASCAL, and C.

From the reviews of the third edition:

"The author defines astrodynamics as ‘the study of the motion of man-made objects in space, subject to both natural and artificially induced forces’ ... . This valuable reference text should be on the bookshelf of anyone concerned with any aspect of satellite or orbital dynamics, including problems of the space environment associated with the proliferation of orbital space debris. The level of presentation is appropriate to both students starting in the field and to seasoned scientists and engineers." (John A Kennewell, Australian Physics, Vol. 45 (1), 2008)

"The book deals with classical methods and techniques related to the unperturbed and perturbed two-body problem with applications to the motion of a spacecraft around the Earth. ... a book for the practicing engineer with some previous background in the field." (Gerard Gómez, Mathematical Reviews, Issue 2009 a)

“The third edition of this known reference and textbook consists of 11 chapters, 4 appendices and 75 algorithms. ... the book will be useful to students and postgraduate students, to ordinary teachers and professors in astronomy, classical mechanics, celestial mechanics and astrodynamics, as well as to all amateurs interesting in astronomy and astrodynamics.” (Sergei Georgievich Zhuravlev, Zentralblatt MATH, Vol. 1191, 2010)