Items related to Degrees Of Love 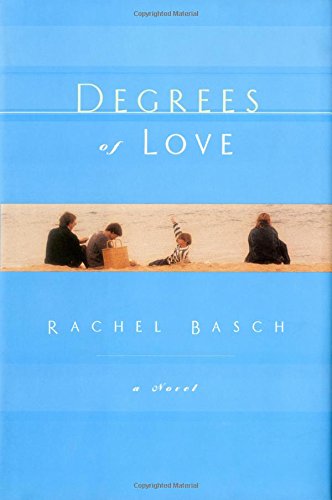 In the tradition of The Good Mother and The Deep End of the Ocean, a beautifully written first novel about a family's worst nightmare.

Jack Keliher and Lily Sterne lead ordinary lives. But when their eighteen-month-old daughter, Katie, is accidentally burned while home alone with Lily and rushed to the hospital, their ordered world begins to unravel. An emergency room physician's report brings the state to take temporary custody of Katie, setting in motion a bureaucratic ordeal in which Lily and Jack are faced with every parent's worst fear: that their child will be taken away from them. Lily fears that her history of mental instability and postpartum depression will be used against her; Jack, in turn, blames Lily. Rachel Basch's quietly compelling narrative alternates between the voices of Jack and Lily as they reveal their increasingly divergent responses to the accident and its consequences. Their fierce struggle to keep their baby safe begins to take its toll on their relationship and their lives, and they are forced to grapple with the emotional and spiritual differences that slowly drive them apart. This exquisite novel's power reaches far beyond the story of an accident and its effect on a family. In depicting the anguish of a family in crisis, Basch has written a stunning work about the nature of privacy, the relationship of work and self, and the fragility--and ultimately, the importance--of love.

Rachel Basch is the author of three novels: The Listerner, The Passion of Reverend Nash, and Degrees of Love. She currently teaches in Fairfield University’s MFA Program and in Wesleyan University’s Graduate Liberal Studies Program.

She could say that she had spent the last five miles of the ride home from the hospital behind ... a thresher, a tractor, a backhoe? Or she could explain that for the past ten days she'd only left the hospital when she was sure that Katie was sleeping deeply enough that she wouldn't wake soon but not so deeply as to be in danger of slipping off into some other realm; and to leave Katie there this morning, after she'd waked up but before the doctor had made her rounds, had been difficult. Or she could tell the truth. She was dreading this interview with Mrs. Thoms from the state's Department of Social Services, almost as much as she had dreaded the daily debridement of Katie's bums. On her way home for the first time in over a week, she had stopped once for coffee, once for half a Xanax, and a third time for a pack of cigarettes, which she had later tossed unopened into a trash can when she stopped again to fill the Subaru with gas.

"Mom, Mom." Their seven-year-old, Ben, came running out to the driveway as Lily was pulling up the emergency brake. Brakes, gates, safety straps-she always remembered them now.

"That lady's going to be here any minute, Morn:' Ben allowed himself to be kissed when Lily stepped out of the car and even reciprocated with a one-armed hug.

Ben looked down at his navy-blue shorts and white golf shirt. "We're supposed to," he said, looking UP now at Lily's brown T-shirt freckled with bleach.

"How's the little?" he said, studying her face for a moment, then bending down to pull up a fat weed from between two squares of slate on the front walk.

"Good. She misses you and Greg."

"Will she still have the bandages on when she comes home?"

Lily stopped walking and looked down at Ben, engrossed in uprooting a whole family of weeds now. "Her legs look much better. A little pink, that's all. Nothing like before, no blisters, nothing like that."

Ben had walked in while Jack was changing

Katie's bandages that first night, after the doctor in the ER had sent her home. He'd seen the tops and sides of his baby sister's feet and the front of one leg bubbling with green, fluid-filled blisters. By the time Jack carried her into the Shriners Burns Institute in Boston the next morning, Katie's feet were swollen and she was running a fever of 104. The doctor who admitted her at the Shriners cursed under his breath as he picked threads of macerated gauze out of the oozing blisters. Not nearly enough Silvadene ointment had been applied by the emergency room physician at their local hospital, the one who'd negligently released Katie from the ER, the one who'd later filed the report of possible abuse.

Jack was waiting for them just inside the house, behind the screen door. Through the mesh, Lily could see that he had dressed himself to match Ben, with navy pants instead of shorts. She imagined that Greg was similarly clothed.

"The Von Trapps," she said.

"You're just lucky you didn't pull into the driveway after her."

"I am lucky." Lily took her hand from Ben and squeezed the trigger of the door handle. "I'd say we're all lucky."

He'd done a good job of cleaning. The wood floors were free of any sign of the outdoors, of the dried grass and sand of summertime, of the three children who usually lived there. Jack had polished the diningroom table and cut some peonies from out back, and he'd bought a new high chair and placed it here, in this room where no one in her right mind would feed a sixteen-month-old, but where there were no hot plates or grills or burners, only mahogany and porcelain and glass.

She wondered what he'd done with the old high chair. She hoped he'd thrown it out. On some afternoon in the spotless future when she was rooting around in the basement for somebody's ice skates, she wouldn't want to stumble across that cheap tray with its brown half-moon where the pot must have landed, molecularly rearranging the plastic so that it had begun to fold in upon itself.

The high chair was still functional. The tray still slid across the arms, probably even locked in place. Lily thought that there must be an unfortunate mother in town who could have used it. But she would have hated for that woman to sit night after night feeding her kid rice cereal, staring at the scarred tray, to come to the inevitable conclusion that the chair had once been used by another mother as a means of punishment or even torture.

Lily wondered if Mrs. Thoms would want to see the chair. "Incongruities in the mother's story ... combined with the presenting injuries ... necessitate further inquiry in this case," the ER physician's report had stated. She'd want to see the kitchen, "the site." "She'll want to see that you've corrected the problem, installed safety devices, grasped the acute seriousness of the situation.," Linda Polowitz, the hospital social worker, and seemingly their only advocate in this whole mess, had said...

1. Degrees of Love (Paperback or Softback)