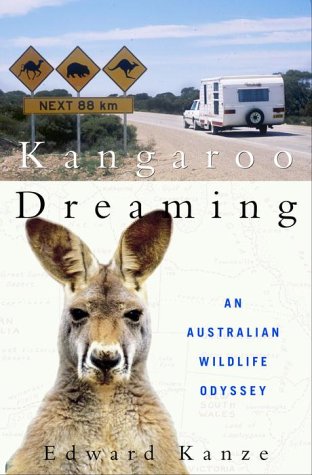 Recounts the author's nine-month journey through Australia in a station wagon with his wife, travelling from Melbourne to the Northern Territory, describing their experiences with wildlife and varying climate and terrain.

A few miles into the scorched, dusty interior of Australia along the Stuart Highway, naturalist Edward Kanze began counting carcasses. "Kangaroos stare blindly into headlights," he writes, "and the big rigs, drunk on momentum, smash them mile after bloody mile." Kanze, on what he compares at great length to Homer's Odyssey, treks around Australia in a 1980 Toyota Corolla with his wife, packing along a library of natural-history books and a predilection for avian, reptilian, and mammalian mating habits. The author of The World of John Burroughs, as well as of a nature guide to New Zealand, he visits every state in Australia in six months, meeting with park rangers, herpetologists, professional birders, and grumpy crocodile-hunter-types on a quest to intimately know the continent's bizarre wildlife.

Kanze's list of finds is immense, with birds as diverse as orange-bellied parrots, the endangered glossy black cockatoo, crimson rosellas, and deadly Cassowaries, which Kanze describes as "an Emu with a stoop, dark, stocky, with a gaudy red necklace of exposed flesh," and that the Park Service warns has trampled several people. But Kanze's adventures are not limited to birdwatching; in fact, his true pursuit is finding the majority of Australia's 40 species of kangaroos. At first they appear in such scant numbers that he marvels at a single spotting. Soon enough though, the 'roos appear in such great abundance that he shifts his focus to the duck-billed platypus outside of Canberra, the mudskippers in the coastal rainforests near Brisbane, the pythons in Lake Barrine, and the "freshies" (freshwater crocodiles) at Edith Falls.

Going beyond the Attenborough-toned walk in the field, Kanze touches on the realities of the Aboriginal plight, the invasion of the European settler, and the desecration of the Australian landscape. He even pays a visit to an asbestos mining town where passers-through are warned not to breathe the particulate-thick air. By the time Kanze and his wife are plenty full of each other, their broken-down Corolla, and the search for the rufous-banded honeyeaters, the pied herons, the hairy-nosed wombats, the white-browed crakes, the pratinoles, the cane toads, the tree kangaroos, the giant lizards, and the flying marsupials, they have sated their list, and the reader, with Australia's remarkable and often-elusive wildlife. --Lolly Merrell

The Kanzes' odyssey began in Melbourne. Soon they were reeling from the cold, rocky mountains of Tasmania (home of the devil, who appears in these pages) via Ayers Rock and the central deserts to the steamy, crocodile-infested estuaries of the Northern Territory. The couple slept on the ground amid the world's most dangerous serpents. They endured the seductive bonhomie of lotos-eating Australians and hobnobbed with kangaroos, koalas, wombats, platypuses, giant monitor lizards, kookaburras, and more than 400 species of birds. They ran a gauntlet of epic hazards. All these adventures come alive in Kangaroo Dreaming, a humorous walk about through the flora, fauna, geography, and history of that surreal, over-the-rainbow place Australians call "Oz."