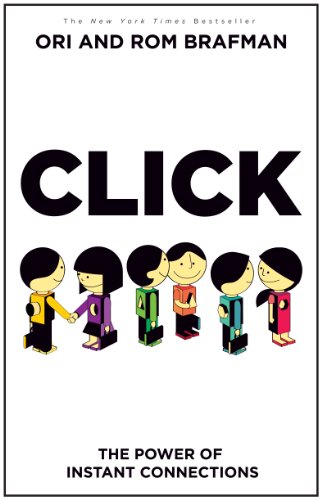 In a book that combines psychology and sociology with an insightful understanding of human interactions, Ori and Rom Brafman have written a compelling narrative that helps us to understand the magic behind those moments when we form an incredible connection with other people, or which cause us to become fully engaged in whatever we are doing. Drawing from recent research in psychology and sociology, and told through the same kinds of engaging stories that made "Sway" a "New York Times" bestseller, "Click" takes us on a roller coaster journey of discovery into those moments in our lives when we are 'in the zone' - when the rest of the world drops away and everything seems to fall into place.

Ori Brafman is an organisational business consultant, and the co-author of the New York Times bestseller Sway and the critically acclaimed book The Starfish and the Spider. He lectures internationally in front of Fortune 500, government and military audiences. He holds an MBA from Stanford Graduate School of Business. Rom Brafman is a psychologist with a private practice in Palo Alto, California and the co-author of Sway. He has won awards for excellence in teaching and promoting positive human growth. They both live in the San Francisco Bay Area.