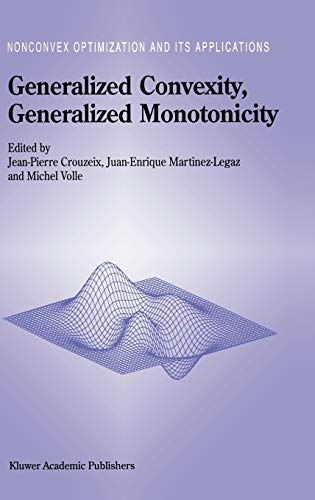 A function is convex if its epigraph is convex. This geometrical structure has very strong implications in terms of continuity and differentiability. Separation theorems lead to optimality conditions and duality for convex problems. A function is quasiconvex if its lower level sets are convex. Here again, the geo­ metrical structure of the level sets implies some continuity and differentiability properties for quasiconvex functions. Optimality conditions and duality can be derived for optimization problems involving such functions as well. Over a period of about fifty years, quasiconvex and other generalized convex functions have been considered in a variety of fields including economies, man­ agement science, engineering, probability and applied sciences in accordance with the need of particular applications. During the last twenty-five years, an increase of research activities in this field has been witnessed. More recently generalized monotonicity of maps has been studied. It relates to generalized convexity off unctions as monotonicity relates to convexity. Generalized monotonicity plays a role in variational inequality problems, complementarity problems and more generally, in equilibrium prob­ lems.