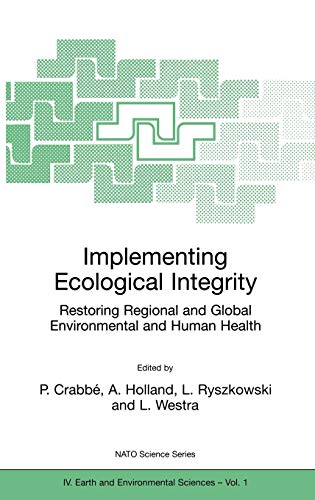 This book contains some of the papers which were presented at the NATO Science, Environmental Security, Advanced Research Workshop on "Implementing Ecological Integrity: Restoring Regional and Global Environmental and Human Health" held in Budapest from June 26 to July 1, 1999. All papers presented are summarized in the Introduction and, in some cases, shorter versions are published. A mUltidisciplinary core of American and Western European participants had met over the preceeding years to discuss the concept of ecological integrity. The term "ecological integrity" is found in environmental policy documents but, generally, is not defined. It competes with other recent terms, or environmental narratives, such as "ecosystem health" and "sustainable development" and also with older ones such as "conservation". Therefore, it is deemed important not only to sort out the definitions of these concepts but also to find out whether their practical implications differ. Moreover, it was interesting to find out whether participants from Central and Eastern European Countries (CEEC) and, more generally, from NATO partner countries would be, first, responsive to this concept and, second, would hold different views of it. This explains the broad, albeit not always consistent, range oftopics which are covered in this book. The core group learned that CEEC and other NATO partners participants were responsive to the concept but that they were less exclusive of human influence.