Items related to The Eye of the World (The Wheel of Time, Book 1) (Wheel... 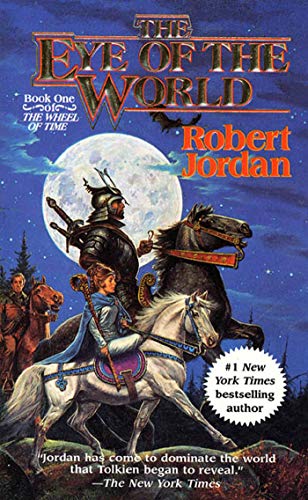 When The Two Rivers is attacked by Trollocs―a savage tribe of half-men, half-beasts― five villagers flee that night into a world they barely imagined, with new dangers waiting in the shadows and in the light.
TV series update: "Sony will produce along with Red Eagle Entertainment and Radar Pictures. Rafe Judkins is attached to write and executive produce. Judkins previously worked on shows such as ABC’s “Agents of SHIELD,” the Netflix series “Hemlock Grove,” and the NBC series “Chuck.” Red Eagle partners Rick Selvage and Larry Mondragon will executive produce along with Radar’s Ted Field and Mike Weber. Darren Lemke will also executive produce, with Jordan’s widow Harriet McDougal serving as consulting producer." ―Variety

"Jordan is able to take ... familiar elements and make them his own, in a powerful novel of wide and complex scope. Open religious and political conflicts add a gritty realism, while the cities and courts provide plenty of drama and splendor. Women have a stronger role than in Tolkien.... Each character in this large cast remains distinct.... Their adventures are varied, and exciting.... The Eye of the World stands alone as a fantasy epic."--Locus

"Robert Jordan has created a fantasy world as tangible and credible as history. He has a fine eye for detail and a vivid sense of drama."--Morgan Llewelyn

"Robert Jordan's The Eye of the World proves that there's still plenty of life in the ancient tradition of epic fantasy. Jordan has a powerful vision of good and evil-- but what strikes me as most pleasurable about The Eye of the World is all the fascinating people moving through a rich and interesting world."--Orson Scott Card

"Jordan's world is rich in detail and his plot is rich in incident. Impressive work, and highly recommended."--ALA Booklist

THE EYE OF THE WORLD (THE WHEEL