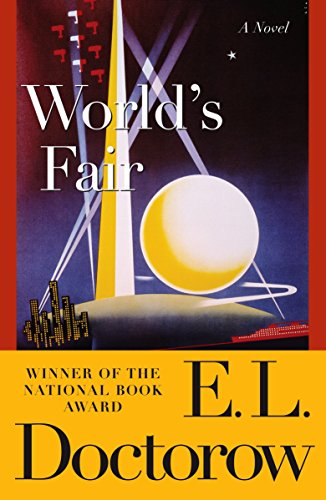 Winner of the National Book Award · “Marvelous . . . You get lost in World’s Fair as if it were an exotic adventure. You devour it with the avidity usually provoked by a suspense thriller.”—The New York Times

Hailed by critics from coast to coast and by readers of all ages, this resonant novel is one of E.L. Doctorow’s greatest works of fiction. It is 1939, and even as the rumbles of progress are being felt worldwide, New York City clings to remnants of the past, with horse-drawn wagons, street peddlers, and hurdy-gurdy men still toiling in its streets. For nine-year-old Edgar Altschuler, life is stoopball and radio serials, idolizing Joe DiMaggio, and enduring the conflicts between his realist mother and his dreamer of a father. The forthcoming Word’s Fair beckons, an amazing vision of American automation, inventiveness, and prosperity—and Edgar Altschuler responds.

A marvelous work from a master storyteller, World’s Fair is a book about a boy who must surrender his innocence to come of age, and a generation that must survive great hardship to reach its future.

“Something close to magic.”—Los Angeles Times

“World’s Fair is better than a time capsule; it’s an actual slice of a long-ago world, and we emerge from it as dazed as those visitors standing on the corner of the future.”—Anne Tyler

“Doctorow has managed to regain the awed perspective of a child in this novel of rare warmth and intimacy. . . . Stony indeed in the heart that cannot be moved by this book.”—People

“Fascinating . . . exquisitely rendered details of a lost way of life.”—Newsweek

"Something close to magic." The Los Angeles Times

The astonishing novel of a young boy's life in the New York City of the 1930s, a stunning recreation of the sights, sounds, aromas and emotions of a time when the streets were safe, families stuck together through thick and thin, and all the promises of a generation culminate in a single great World's Fair . . .

E. L. Doctorow’s works of fiction include Welcome to Hard Times, The Book of Daniel, Ragtime, Loon Lake, World’s Fair, Billy Bathgate, The Waterworks, City of God, The March, Homer & Langley, and Andrew’s Brain. Among his honors are the National Book Award, three National Book Critics Circle awards, two PEN/Faulkner awards, and the presidentially conferred National Humanities Medal. In 2009 he was shortlisted for the Man Booker International Prize, honoring a writer’s lifetime achievement in fiction, and in 2012 he won the PEN/ Saul Bellow Award for Achievement in American Fiction, given to an author whose “scale of achievement over a sustained career places him in the highest rank of American literature.” In 2013 the American Academy of Arts and Letters awarded him the Gold Medal for Fiction. In 2014 he was honored with the Library of Congress Prize for American Fiction.