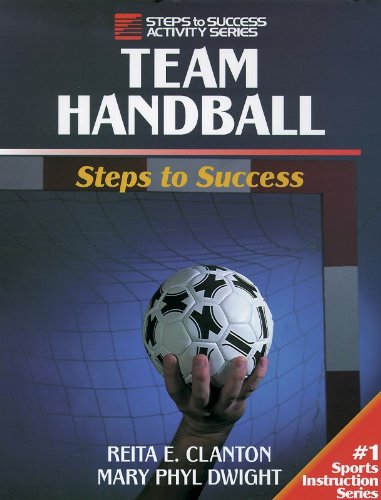 Join the growing number of people who are discovering the fun and excitement of team handball! With more points scored than soccer and more continuous action than basketball, team handball has been a popular international sport for years, and now its popularity is on the rise in the United States. No wonder--this fast-paced team sport lets players take full advantage of their running, jumping, and throwing abilities.

Each step is an easy transition from the one before. The first steps provide a solid foundation of basic skills and concepts. As players progress, they'll learn how to combine these skills to attack the goal, decide when to pass and when to shoot, and support their teammates when attacking and defending. The final steps show how teammates can organize as a unit in attack and on defense and how good communication contributes to the effectiveness of the team.

Team Handball: Steps to Success features 62 drills that develop players' shooting, dribbling, passing, and catching skills. The drills come with performance goals and a list of key points to remember in executing them. Plus, many drills include instructions for increasing or decreasing the difficulty of the drill.

By studying the book's 187 illustrations and following the simple instructions, players will learn

- why each skill or concept is important,
- the keys to proper technique,
- how to analyze and correct common errors,
- how to practice the skills in game-like situations, and
- how to check their progress.

The book's appendixes explain the basic rules of the game and show how to modify a given floor space to create a team handball court.

Part of the highly popular Steps to Success Series, this book will help players learn the game quickly and provide the foundation for their future development.

"This is an excellent introductory text. Sport skill components are easily read, understood, and implemented."

"The first book of its kind in English. The authors methodically explain how to learn basic tactics and skills of team handball."

"This thorough and well-structured book provides many practical hints and exercises. It’s clearly written and entertaining."

"The authors are experienced players and excellent teachers. The sections on team strategy should be especially helpful to beginning teams and coaches."


Reita Clanton and Mary Phyl Dwight began playing team handball more than 20 years ago. From 1974 to 1984 they were members of the U.S. Women's National Team. During that time they played in over 100 international games, two world championships, and five U.S. Olympic Festivals. They reached the pinnacle of their playing careers in 1984 as members of the women's Olympic team, which finished in fourth place.

Clanton has coached four U.S. Olympic Festival teams, three of them gold medal teams. Since 1987 she has been the team handball codirector, as well as a clinician and coach, for Special Olympics International. She is the assistant coach for women's team handball in the 1996 Olympics and head coach of the women's Team 2000. She also conducts team-handball clinics throughout the United States.

Clanton's playing and coaching experience goes beyond team handball, though. She has coached winning basketball programs at the high school, junior college, and university level, and she has played on the varsity basketball and volleyball teams at Auburn University. Her basketball uniform number was later retired.

Dwight is the women's development coach for the U.S. Team Handball Federation. In 1995 she was the team leader for the USA Women's Pan-American Team, which won a gold medal. She also has coached two U.S. Olympic Festival teams and has been the team handball director for Special Olympics International since 1987. Like Clanton, she conducts clinics for players of all ages.

Among Dwight's other sporting experiences are stints as head volleyball and softball coach at the university level. As a varsity athlete at Southwest Missouri State University (SMSU), she was captain of her basketball, volleyball, and track teams and competed in softball and cross-country as well. She was elected to the school's Athletic Hall of Fame in 1981.