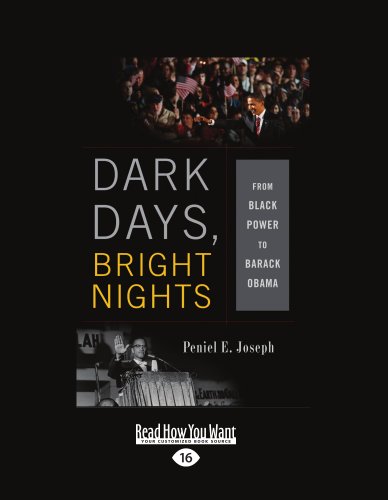 The Civil Rights Movement is now remembered as a long-lost era, which came to an end along with the idealism of the 1960s. In Dark Days, Bright Nights, acclaimed scholar Peniel E. Joseph puts this pat assessment to the test, showing the 60s - particularly the tumultuous period after the passage of the 1965 Voting Rights Act - to be the catalyst of a movement that culminated in the inauguration of Barack Obama. Joseph argues that the 1965 Voting Rights Act burst a dam holding back radical democratic impulses. This political explosion initially took the form of the Black Power Movement, conventionally adjudged a failure. Joseph resurrects the movement to elucidate its unfairly forgotten achievements. Told through the lives of activists, intellectuals, and artists, including Malcolm X, Huey P. Newton, Amiri Baraka, Tupac Shakur, and Barack Obama, Dark Days, Bright Nights will make coherent a fraught half-century of struggle, reassessing its impact on American democracy and the larger world

About the Author:
Peniel E. Joseph is professor of history at Tufts University and the author of Waiting 'Til the Midnight Hour. He is the recipient of fellowships from the Woodrow Wilson International Center for Scholars and the Ford Foundation, and his work has appeared in Souls, New Formations, and The Black Scholar. He lives in Somerville, Massachusetts.