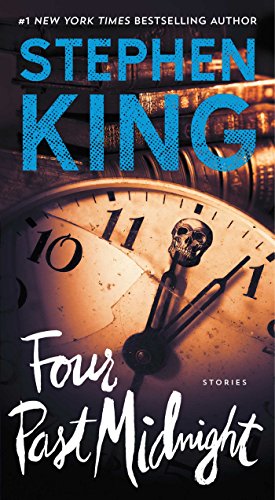 The #1 New York Times bestseller—four chilling novellas from Stephen King that will “grab you and not let go” (The Washington Post).

One Past Midnight: “The Langoliers” takes a red-eye flight from Los Angeles to Boston into a most unfriendly sky. Only eleven passengers survive, but landing in an eerily empty world makes them wish they hadn’t. Because something’s waiting for them.

Three Past Midnight: “The Library Policeman” is set in Junction City, Iowa, an unlikely place for evil to be hiding. But for small businessman Sam Peebles, who thinks he may be losing his mind, another enemy is hiding there as well—the truth. If he can find it in time, he might stand a chance.

Four Past Midnight: “The Sun Dog" is a menacing canine appearing in every Polaroid picture that fifteen-year-old Kevin Delevan takes with his new camera, beckoning him to the supernatural. Old Pop Merrill, Castle Rock’s sharpest trader, aims to exploit it for profit, but this creature that shouldn’t exist at all is a very dangerous investment.

About the Author:
Stephen King is the author of more than sixty books, all of them worldwide bestsellers. His recent work includes The Institute, Elevation, The Outsider, Sleeping Beauties (cowritten with his son Owen King) and the Bill Hodges trilogy, End of Watch, Finders Keepers, and Mr. Mercedes (an Edgar Award winner for Best Novel and an AT&T Audience Network original television series). His novel 11/22/63 was named a top ten book of 2011 by The New York Times Book Review and won the Los Angeles Times Book Prize for Mystery/Thriller. His epic works The Dark Tower and It are the basis for major motion pictures, with It now the highest grossing horror film of all time. He is the recipient of the 2018 PEN America Literary Service Award, the 2014 National Medal of Arts, and the 2003 National Book Foundation Medal for Distinguished Contribution to American Letters. He lives in Bangor, Maine, with his wife, novelist Tabitha King.
From AudioFile:
Stephen King stretches this short story into a novella. A young boy gets a mysterious Polaroid camera that only takes pictures of a mean dog. The magic camera is creating a portal so that the mean dog can come to Earth and eat people. The boy stops him. The end. The book is saved by narrator Tim Sample's relentless efforts to wring suspense from the many scenes that are not suspenseful, just drawn out descriptions of mundane things. Sample speaks urgently at the right times, but sometimes even that--combined with suspenseful music--isn't enough. King's novella would benefit from a brutal editor hacking away the nonessentials. It's one of his lesser works. M.S. © AudioFile 2009, Portland, Maine