Items related to Ring of Bright Water: A Trilogy 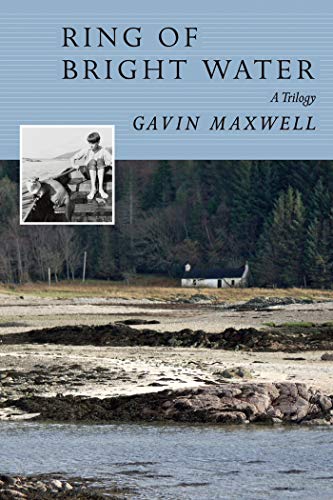 This volume weaves together the Scottish otter stories from Gavin Maxwell's three non-fiction books, Ring of Bright Water (1960), The Rocks Remain (1963), and Raven Meet Thy Brother (1969). Maxwell was both an extraordinarily evocative writer and a highly unusual man. While touring the Iraqi marshes, he was captivated by an otter and became a devoted advocate of and spokesman for the species. He moved to a remote house in the Scottish highlands, co-habiting there with three otters and living an idyllic and isolated life at least for a while. Fate, fame, and fire conspired against this paradise, and it, too, came to an end, though the journey was filled with incident and wonder. Maxwell was also talented as an artist, and his sinuous line drawings of these amphibious and engaging creatures, and the homes they occupied, illustrate his story. This book stands as a lasting tribute to a man, his work, and his passion. It was received and has endured as a classic for its portrait not only of otters but also of a man who endured heartaches and disappointments, whose life embodied both greatness and tragedy. He writes with rare eloquence about his birth, his devotion to the beloved Scottish highlands, and the wildlife he loved, while refusing to ignore the darker aspects of his nature and of nature in its larger sense. Maxwell's legacy has been preserved at the Eilean Ban Trust and Bright Water Visitor Centre. A Nonpareil Book by David R. Godine.

An aristocrat, adventurer, naturalist, conservationist, secret agent, shark hunter, racing driver, painter and social renegade, Gavin Maxwell was born in 1914, the youngest son of an aristocratic Scottish family. During a trip to Iraq in 1956, he fell in love with his first otter. Moving to Scotland's West Coast, he set up home with his animals, and after its destruction by fire, he moved to a lighthouse cottage off the Isle of Skye. He died in 1969 at age 55. He wrote and illustrated many books, the most beloved being Ring of Bright Water, released as a film in 1969.

Gavin Maxwell was to otters what Joy Adamson was to lions, Dian Fossey to gorillas, Jane Goodall to chimpanzees and Grey Owl to beavers. Ring of Bright Water was one of the twentieth-century s most popular wildlife books (top of the U.S. bestseller lists for a year, over two million sold worldwide) and was habitually bracketed with Thoreau s Walden, Gilbert White s Natural History of Selborne and Henry Williamson's Tarka the Otter. --Douglas Botting, Gavin Maxwell: A Life

One of the outstanding wildlife books of all time. --New York Herald Tribune

One of the outstanding wildlife books of all time. --New York Herald Tribune

Likely outside of assigned reading, in many ways, Gavin Maxwell is still the most quintessential of UK writers. Born in Scotland during the World War I, he is most remembered for making otters an appealing pet in his Ring of Bright Water trilogy. Based on Maxwell's ongoing adventures with a series of otters he took into his home over the years, Bright Water and its sequels, The Rocks Remain and Raven Seek Thy Brother, manage to combine all the humor of Gerald Durrell with the heartrending truth of James Herriot. Yes, otters are very cute, but also otters die, sometimes quite horrifically. (No, I'm not happy about that, but knowing it going in helps a lot.) What's interesting about Maxwell's stories is that his is not a picture of domestic bliss; the wild animals might be domesticated, but the wild remains. . . . For a picture of one man's very complicated life in mid century Britain, Maxwell is certainly a must read. There is something endlessly endearing about how hard he tried to live a life only he could imagine possible. Plus, it's just nice to know that otters truly are as charismatic as many of us had always hoped. Kudos to David R. Godine for bringing Maxwell's stories to a new generation in one volume that includes the author's sweet pencil drawings as well. --Bookslut

Ring of Bright Water: A Trilogy (Paperback or Softback)