Items related to The Snubby Revolver: The ECQ, Backup, and Concealed...

The Snubby Revolver: The ECQ, Backup, and Concealed Carry Standard 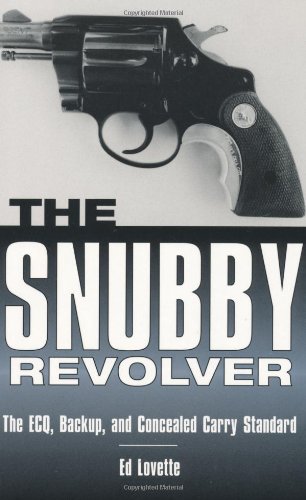 At a time when the semiauto pistol has become the issue handgun for our police and military and the handgun of choice for a lot of citizens, the snubby holds its own. It is available in a wider range of calibers, weights and finishes than at any time in its history. It continues to serve as a dependable backup weapon for the police officer, and it is a highly popular choice with the legally armed citizen. In this book, former CIA operative and longtime Combat Handguns columnist Ed Lovette pays homage to the short-barreled revolver, or snubby, holding it up as the timeless standard in concealed carry, backup and extreme close quarters (ECQ) defensive weapons. He also addresses the four most common complaints about the snubby - grip, front sight, trigger and ammo capacity - and presents viable ways to remedy those issues based on his personal experience. Lovette devotes the second half of the book to defensive tactics, running the gamut from basic personal defense to strategic planning for extraordinary situations such as surveillance and carjackings to considerations specific to the use of the pocket revolver. This book is a must for anyone seeking objective, practical insight into the snub-nose revolver's enduring value.

Ed Lovette is a retired CIA paramilitary operations officer. He was also a captain in the U.S. Army Special Forces and is a 10-year law enforcement veteran. He has a long association with Combat Handguns magazine, for which he currently writes the Last Shots column.

1. The Snubby Revolver: The ECQ, Backup, and Concealed Carry Standard

3. THE SNUBBY REVOLVER: THE ECQ, BA