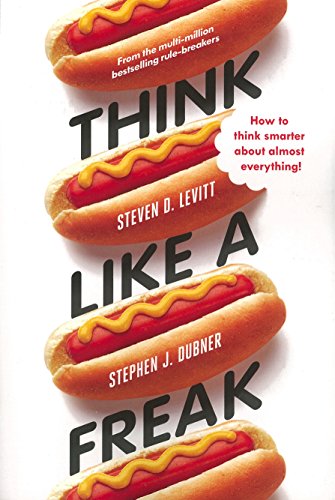 In one of the many wonderful moments in Think Like a Freak, Steven Levitt and Stephen Dubner ask the question: Who is easier to fool—kids or adults? The obvious answer, of course, is kids. The cliché is about taking candy from a baby, not a grown man. But instead of accepting conventional wisdom as fact, the two sit down with the magician Alex Stone—someone in the business of fooling people—and ask him what he thinks. And his answer? Adults.

Stone gave the example of the staple of magic tricks, the “double lift,” where two cards are presented as one. It’s how a magician can seemingly bury a card that you have selected at random and then miraculously retrieve it. Stone has done the double lift countless times in his career, and he says it is kids—overwhelmingly—who see through it. Why? The magician’s job is to present a series of cues—to guide the attention of his audience—and adults are really good at following cues and paying attention. Kids aren’t. Their gaze wanders. Adults have a set of expectations and assumptions about the way the world works, which makes them vulnerable to a profession that tries to exploit those expectations and assumptions. Kids don’t know enough to be exploited. Kids are more curious. They don’t overthink problems; they’re more likely to understand that the basis of the trick is something really, really simple. And most of all—and this is my favorite—kids are shorter than adults, so they quite literally see the trick from a different and more revealing angle.

Think Like a Freak is not a book about how to understand magic tricks. That’s what Dubner and Levitt’s first two books—Freakonomics and SuperFreakonomics—were about. It’s about the attitude we need to take towards the tricks and the problems that the world throws at us. Dubner and Levitt have a set of prescriptions about what that attitude comes down to, but at its root it comes down to putting yourself in the mind of the child, gazing upwards at the double lift: free yourself from expectations, be prepared for a really really simple explanation, and let your attention wander from time to time.

The two briefly revisit their famous argument from their first book about the link between the surge in abortions in the 1970s and the fall in violent crime twenty years later. Their point is not to reargue that particular claim. It is to point out that we shouldn’t avoid arguments like that just because they leave us a bit squeamish. They also tell the story of the Australian doctor Barry Marshall, who overturned years of received wisdom when he proved that ulcers are caused by gastric bacteria, not spicy food and stress. That idea was more than heretical at first. It was absurd. It was the kind of random idea that only a child would have. But Dubner and Levitt’s point, in their utterly captivating new book, is that following your curiosity—even to the most heretical and absurd end—makes the world a better place. It is also a lot of fun.


From the Back Cover:

The New York Times bestselling Freakonomics changed the way we see the world, exposing the hidden side of just about everything.

Now, with Think Like a Freak, Steven D. Levitt and Stephen J. Dubner have written their most revolutionary book yet. With their trademark blend of captivating storytelling and unconventional analysis, they take us inside their thought process and offer a blueprint for an entirely new way to solve problems. The topics range from business to philanthropy to sports to politics, all with the goal of retraining your brain. Along the way, you'll learn the secrets of a Japanese hot-dog-eating champion, the reason an Australian doctor swallowed a batch of dangerous bacteria, and why Nigerian e-mail scammers make a point of saying they're from Nigeria.

Levitt and Dubner plainly see the world like no one else. Now you can too. Never before have such iconoclastic thinkers been so revealing—and so much fun to read.

Book Description Penguin, 2014. Paperback. Condition: GOOD. Spine creases, wear to binding and pages from reading. May contain limited notes, underlining or highlighting that does affect the text. Possible ex library copy, will have the markings and stickers associated from the library. Accessories such as CD, codes, toys, may not be included. Seller Inventory # 3171500113

Book Description Penguin, 2014. Condition: Good. Airside edition. Shows some signs of wear, and may have some markings on the inside. Seller Inventory # 5823168-6

6. Think Like a Freak: Secrets of the Rogue Economist

Book Description Penguin Books Ltd, United Kingdom, London, 2014. Paperback. Condition: Very Good. From the rule-breaking authors of international bestsellers Freakonomics and Superfreakonomics, this is the ultimate guide to how to Think Like a Freak The Freakonomics books have come to stand for something: challenging conventional wisdom; using data rather than emotion to answer questions; and learning to unravel the world's secret codes. Now Levitt and Dubner have gathered up what they have learned and turned it into a readable and practical toolkit for thinking differently - thinking, that is, like a Freak. Whether you are interested in the best way to improve your odds in penalty kicks, or in major global reforms, here is a blueprint for an entirely new way to solve problems. Along the way, you'll learn how the techniques of a Japanese hot-dog-eating champion can help you, the reason an Australian doctor swallowed a batch of dangerous bacteria, why Nigerian e-mail scammers make a point of saying they're from Nigeria, and why Van Halen's demanding tour contract banning brown M&Ms was really a safety measure. You'll learn why sometimes it's best to put away your moral compass, and smarter to think like a child. You will be given a master class in incentives-because for better or worse, incentives rule our world. And you will learn to quit before you fail, because you can't solve tomorrow's problem if you aren't willing to abandon today's dud. Levitt and Dubner see the world like no one else. Now you can too. Never before have such iconoclastic thinkers been so revealing-and so much fun to read. Steven D. Levitt, a professor of economics at the University of Chicago, was awarded the John Bates Clark medal, given to the most influential American economist under the age of forty. He is also a founder of The Greatest Good, which applies Freakonomics-style thinking to business and philanthropy. Stephen J. Dubner is an award-winning author, journalist, and radio and TV personality. He quit his first career-as an almost-rock-star-to become a writer. He has worked for The New York Times and published three non-Freakonomics books. He lives with his family in New York City. The book has been read, but is in excellent condition. Pages are intact and not marred by notes or highlighting. The spine remains undamaged. Seller Inventory # CIN000656922

8. Think Like a Freak: Secrets of the Rogue Economist Levitt, Steven D. and Dubner, Stephen J.

Shipping: US$ 8.44
From United Kingdom to U.S.A.
Destination, rates & speeds

Shipping: US$ 5.63
From United Kingdom to U.S.A.
Destination, rates & speeds

Shipping: US$ 7.72
From United Kingdom to U.S.A.
Destination, rates & speeds