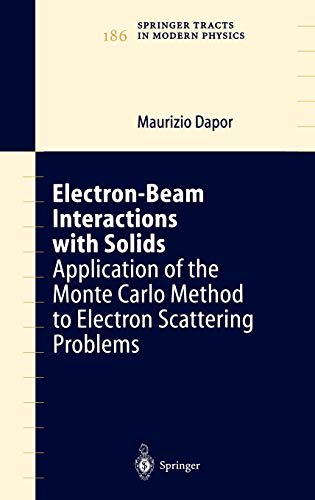 The interaction of electron beams with solid targets has been studied since the early part of the last century. Present interest is spurred on by the fundamental role played by the electron-solid interaction in - among other areas - scanning electron microscopy, electron-probe microanalysis and Auger electron spectroscopy. This book aims to investigate selected aspects of the interaction of electrons with matter (backscattering coefficient for bulk targets, absorption, backscattering and transmission for supported and unsupported thin films, implantation profiles, secondary electron emission and so on); to study the probabilistic laws of interaction of the individual electrons with the atoms (elastic and inelastic cross sections); to introduce the Monte Carlo method and its use for computing the macroscopic characteristics of the interaction processes. Each chapter compares theory, simulations and experimental data.

Book Description Springer-Verlag Berlin and Heidelberg GmbH & Co. KG, Germany, 2003. Hardback. Condition: New. 2003 ed. Language: English. Brand new Book. The interaction of an electron beam with a solid target has been studied since the early part of the past century. Since 1960, the electron-solid interaction hasbecomethesubjectofanumberofinvestigators'workowingtoitsfun- mental role in scanning electron microscopy, in electron-probe microanalysis, in Auger electron spectroscopy, in electron-beam lithography and in radiation damage. The interaction of an electron beam with a solid target has often been investigated theoretically by using the Monte Carlo method, a nume- cal procedure involving random numbers that is able to solve mathematical problems. This method is very useful for the study of electron penetration in matter. The probabilistic laws of the interaction of an individual electron with the atoms constituting the target are well known. Consequently, it is possible to compute the macroscopic characteristics of interaction processes by simulating a large number of real trajectories, and then averaging them. The aim of this book is to study the probabilistic laws of the interaction of individual electrons with atoms (elastic and inelastic cross-sections); to - vestigate selected aspects of electron interaction with matter (backscattering coe?cients for bulk targets, absorption, backscattering and transmission for both supported and unsupported thin ?lms, implantation pro?les, seconda- electron emission, and so on); and to introduce the Monte Carlo method and its applications to compute the macroscopic characteristics of the inter- tion processes mentioned above. The book compares theory, computational simulations and experimental data in order to o?er a more global vision. Seller Inventory # APC9783540006527