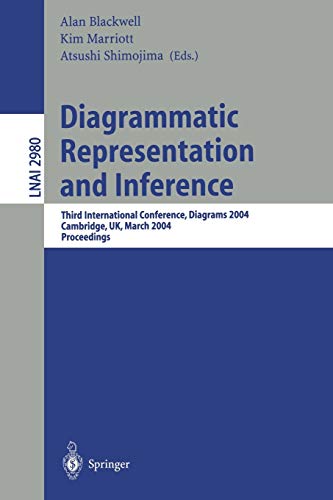 Although diagrammatic representations have been a feature of human com- nication from early history, recent advances in printing and electronic media technologyhaveintroducedincreasinglysophisticatedvisualrepresentationsinto everydaylife. We need to improve our understanding of the role of diagramsand sketches in communication, cognition, creative thought, and problem-solving. These concerns have triggered a surge of interest in the study of diagrammatic notations, especially in academic disciplines dealing with cognition, compu- tion, and communication. We believe that the study of diagrammatic communication is best pursued as an interdisciplinary endeavor. The Diagrams conference series was launched to support an international research community with this common goal. After successful meetings in Edinburgh (2000) and Georgia (2002), Diagrams 2004 was the third event in the series. The Diagramsseries attracts a largenumber of researchersfrom virtually all academic?elds who arestudying the nature of d- grammatic representations,their use in human communication, and cognitive or computationalmechanismsforprocessingdiagrams.Bycombiningseveralearlier workshop and symposium series that were held in the US and Europe – R- soning with Diagrammatic Representations (DR), US; Thinking with Diagrams (TWD), Europe; and Theory of Visual Languages (TVL), Europe – Diagrams has emerged as a major international conference on this topic.