Items related to Logic Based Program Synthesis and Transformation: 14th... 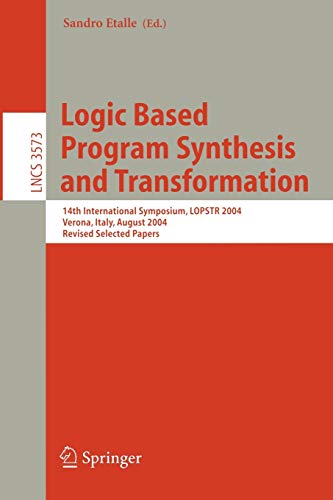 This volume contains a selection of the papers presented at LOPSTR 2004, the 14th International Symposium on Logic-Based Program Synthesis and Transf- mation. The aim of the LOPSTR series is to stimulate and promote international research and collaboration on logic-based program development. The workshop is open to contributions in logic-based program development in any language paradigm. This year, LOPSTR put extra emphasis on the ?eld of veri?cation by incorporating the VCL (Veri?cation in Computational Logic) workshop. LOPSTR 2004 took place in Verona, Italy, and was co-located with the - ternational Static Analysis Symposium (SAS 2004), the ACM SIGPLAN 2004 Workshop on Partial Evaluation and Semantics Based Program Manipulation (PEPM 2004), and the 6th ACM-SIGPLAN International Conference on Pr- ciples and Practice of Declarative Programming (PPDP 2004). Past workshops were held in Manchester (UK), Louvain-la-Neuve (Belgium), Pisa(Italy),Arnhem(theNetherlands),Stockholm(Sweden),Leuven(Belgium), Venice (Italy), London (UK), Paphos (Cyprus), Madrid (Spain) and Uppsala (Sweden). Since 1994 the proceedings have beenpublished in the Springer LNCS series. We received 23 full paper submissions (1 from Australia, 3 from the US, 4 1 from Asia, 3 from Africa, 11 from Europe , and one Spain-US cooperation), and 11 extended abstract submissions (1 from Israel, 1 from Africa, one US-Spain 2 cooperation,andtheotherswerefromEurope ).Weacceptedforpresentation11 full papers and 8 extended abstracts. This volume contains a selection consisting of the 11 full papers and of the full version of 6 of the extended abstracts.