Items related to Summa de virtutibus] [On the Virtues ; The Summation... 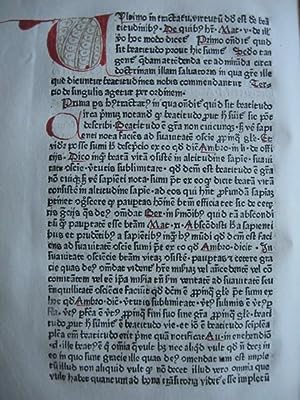 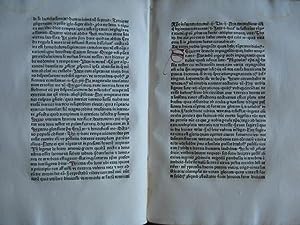 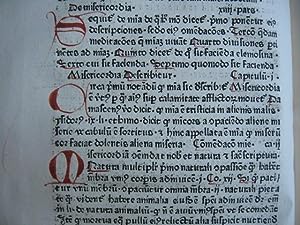 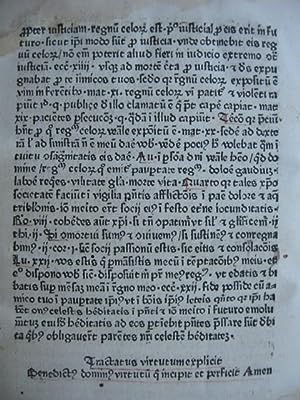 169 Folio leaves ; 31 cm. ; 2° ; bound in quarter suede with three raised bands, hand-written titles on spine ; an incunable from the early and important press of Michael Wenssler of Basel, Switzerland ; this partial copy without title page or colophon ; Hain 12383, Proctor 7464, British Museum 15th century III, 722 (IB.37053), Polain 3034, Goff P-83, Walsh 1114 ; single column 36 line Gothic type, with conventional 15th century printing ligatures, and with rubricized initials throughout; some generally minor edge staining and tears ; a few worm holes in the margins ; a few pages with larger stains ; this copy with no chapter headings or signature marks ; begins at Quintć Partis Principalis, Tractatus de Beatitudinibus, with the section on Patience and the temptations of demons and ends the Beatitudes with the discourse on Peace; rubics in the same hand that executed those for the 1474 Quennell edition at the University of Darmstadt ; Michael Wenssler, floruit 1472-1497 [name variations: Wensler, Wensel, Vrenssler, Wenkler or Wenßler] was originally from Strasbourg, but became a citizen of Basel in 1473 and was active from 1475 to 1488, when he had to sell his press to pay off his debts. He then leaves Basel for Cluny, while his family remained behind in penury, and he does not return until 1499, when he retires ; this publication, amongst the earliest for Basle, is of the celebrated work of William of Auvergne, ca. 1180-1271 : the Summa de Virtutibus, or The Summation of Virtues, the first of the famous two-part tract (whose second part, published separately, treats of the vices). William was born in the former Province of Auvergne about 1180, and by 1223 he was master of theology at the University of Paris and a canon at Notre Dame. He was consecrated Bishop and given the See of Paris in 1228 by Pope Gregory IX, and he remained there until his death in 1249. The Summa de Virtutibus et Viitis, On the Virtues and Vices, a massive work, is itself part of a much larger work, the Magisterium Divinale et Sapientiale (The Teaching on God in the Mode of Wisdom). The style of the work is somewhat rambling, moving off into many tangents as it explores related concepts and makes the work appear as an extemporaneous discourse, often making a point and then immediately raising objections to that point, which William then proceeds to refute. It was reprinted many times and was a monumental Dominican theological work. [name variants for William of Auvergne: Guilelmus Peraldus, Guillermus Parisiensis, Guilielmus Peraldus, Guilelmus Peraldus, Guillaume Perrault, Guilelmus Peraldus, Willelmi de Peraldo, Wilhelm Peraldus, Guilelmus de Petra Alda, Guillaume de Peyraud (Ardeche), G. Lugdunensis, G. de Peyrauta, G. de Peraudus, G. Parisiensis, Guil. de Lugduno, Guillelmus Peraltus, Fr. Guil. a Peira, Fr. Guillermo Peraldo, Wilhelmus Ep. Lugdun., and Willelmus Arch. Lug.] ; extremely rare edition ; VG. Bookseller Inventory # 5547


TERMS: All items subject to prior sale.
Returns accepted in same condition within 10 business days for any reason.