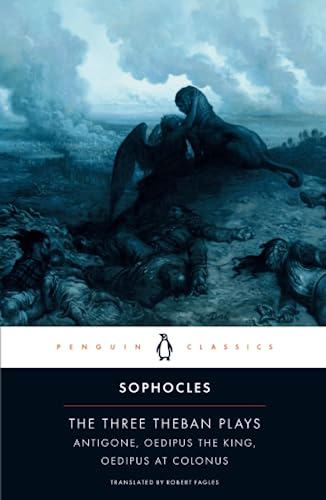 The heroic Greek dramas that have moved theatergoers and readers since the fifth century B.C.

Towering over the rest of Greek tragedy, the three plays that tell the story of the fated Theban royal family—Antigone, Oedipus the King and Oedipus at Colonus—are among the most enduring and timeless dramas ever written. Robert Fagles's authoritative and acclaimed translation conveys all of Sophocles's lucidity and power: the cut and thrust of his dialogue, his ironic edge, the surge and majesty of his choruses and, above all, the agonies and triumphs of his characters. This Penguin Classics edition features an introduction and notes by the renowned classicist Bernard Knox.

Aristotle called "Oedipus The King," the second-written of the three Theban plays written by Sophocles, the masterpiece of the whole of Greek theater. Today, nearly 2,500 years after Sophocles wrote, scholars and audiences still consider it one of the most powerful dramatic works ever made. Freud sure did. The three plays--"Antigone," "Oedipus the King," and "Oedipus at Colonus"--are not strictly a trilogy, but all are based on the Theban myths that were old even in Sophocles' time. This particular edition was rendered by Robert Fagles, perhaps the best translator of the Greek classics into English.

Book Description Penguin Books Ltd, United Kingdom, 2020. Paperback. Condition: New. Language: English. Brand new Book. Towering over the rest of Greek tragedy, Sophocles' The Three Theban Plays are among the most enduring and timeless dramas ever written. This Penguin Classics edition is translated by Robert Fagles with introductions and notes by Bernard Knox.Collected here are Antigone, Oedipus the King and Oedipus at Colonus, in a translation by Robert Fagles which retains all of Sophocles' lucidity and power: the cut and thrust of his dialogue, his ironic edge, the surge and majesty of his choruses and, above all, the agonies and triumphs of his characters. Oedipus in exile, searching for his identity, desperately trying to avoid his fate, seeking the truth of his origins and achieving immortality; his daughter, Antigone, defending her integrity and ideals to the death - these heroic, tragic figures have captivated theatregoers and readers since the fifth century BC. It is Sophocles' characterisation of Oedipus that would, in the nineteenth century, inspire Sigmund Freud to a revolutionary conception of the human mind, and the tragedies in this volume continue to move and inspire us to this day.Sophocles (496-405 BC) was born at Colonus, just outside Athens. His long life spanned the rise and decline of the Athenian Empire; he was a friend of Pericles, and though not an active politician he held several public offices, both military and civil. The leader of a literary circle and friend of Herodotus, Sophocles wrote over a hundred plays, drawing on a wide and varied range of themes, and winning the City Dionysia eighteen times; though only seven of his tragedies have survived, among them Antigone, Oedipus Rex, Ajax and Oedipus at Colonus.If you enjoyed The Three Theban Plays, you might like Aeschylus' The Oresteia, also available in Penguin Classics.'I know of no better English version'Sir Hugh Lloyd-Jones, Oxford University'The most impressive verse translations of Sophocles that have been made'Stephen Spender. Seller Inventory # AAZ9780140444254

9. The Three Theban Plays: Antigone/Oedipus the King/Oedipus at Colonus (Paperback or Softback)