Items related to Moby-Dick or, The Whale (Penguin Classics) 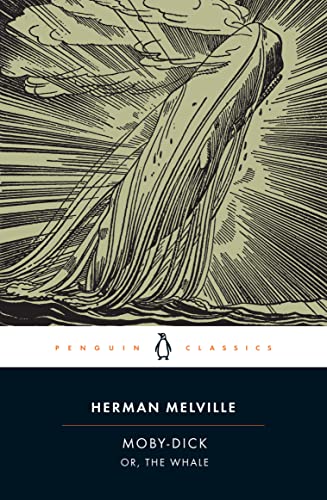 Herman Melville’s masterpiece, one of the greatest works of imagination in literary history. Nominated as one of America’s best-loved novels by PBS’s The Great American Read

Over a century and a half after its publication, Moby-Dick still stands as an indisputable literary classic. It is the story of an eerily compelling madman pursuing an unholy war against a creature as vast and dangerous and unknowable as the sea itself. But more than just a novel of adventure, more than an encyclopedia of whaling lore and legend, Moby-Dick is a haunting, mesmerizing, and important social commentary populated with several of the most unforgettable and enduring characters in literature. Never losing its cultural prescence, Melville’s nautical epic has inspired many films over the years, including the film adaptation of Nathanael Philbrick’s In the Heart of the Sea, starring Chris Hemsworth, Cillian Murphy, Ben Wishaw, and Brendan Gleeson, and directed by Ron Howard. Written with wonderfully redemptive humor, Moby-Dick is a profound and timeless inquiry into character, faith, and the nature of perception. This Penguin Classics edition, featuring an introduction by Andrew Delbanco and notes by Tom Quirk, prints the Northwestern-Newberry edition of Melville's text, approved by the Center for Scholarly Editions and the Center for Editions of American Authors of the MLA.

From the Publisher:
Burt Reynolds reading this story brings expression, meaning and action to the chase of a lifetime. Mr. Reynolds has starred in countless films, including the Bandit series. He also starred in the long-running series, Evening Shade.
From the Author:
Herman Melville was born August 1, 1819 in New York City. Son of a prosperous importer and a famous grandfather, Melville became a prolific writer at a very young age. Melville died on September 28, 1891.

Moby-dick : Or, the Whale

Moby-Dick: or, The Whale (Paperback)

Book Description Paperback. Condition: New. Repr. Language: English. Brand new Book. The original 'Great American Novel', Herman Melville's Moby-Dick is a masterful study of obsession. This Penguin Classics edition contains an introduction by Andrew Delblanco, with explanatory commentary by Tom Quirk.'Call me Ishmael.'So begins Herman Melville's masterpiece, one of the greatest works of imagination in literary history. As Ishmael is drawn into Captain Ahab's obsessive quest to slay the white whale Moby-Dick, he finds himself engaged in a metaphysical struggle between good and evil. More than just a novel of adventure, more than an paean to whaling lore and legend, Moby-Dick is a haunting social commentary, populated by some of the most enduring characters in literature; the crew of the Pequod, from stern, Quaker First Mate Starbuck, to the tattooed Polynesian harpooner Queequeg, are a vision of the world in microcosm, the pinnacle of Melville's lifelong meditation on America. Written with wonderfully redemptive humour, Moby-Dick is a profound, poetic inquiry into character, faith, and the nature of perception.Based on the Northwestern University Press edition, this Penguin Classics edition includes a critical introduction by Andrew Delbanco, as well as valuable explanatory notes, maps, illustrations and a glossary of nautical terms.Herman Melville is now regarded as one of America's greatest novelists. Much of the material for his novels was drawn from his own experience as a seaman aboard whaling ships. He wrote his masterpiece Moby-Dick in 1851, and died in 1891.If you enjoyed Moby-Dick, you may like Miguel de Cervantes' Don Quixote, also available in Penguin Classics.'After reading Moby-Dick, you will have enhanced your sense of wonder, you will have increased the size of your universe'E. M. Forster'One of the strangest and most wonderful books in the world . It moves awe in the soul'D. H. Lawrence. Seller Inventory # AAZ9780142437247

Moby-Dick, or, The Whale

Moby-Dick: Or, the Whale (Paperback)

Moby-Dick: or, The Whale

Moby-Dick: or, The Whale (Penguin Classics)