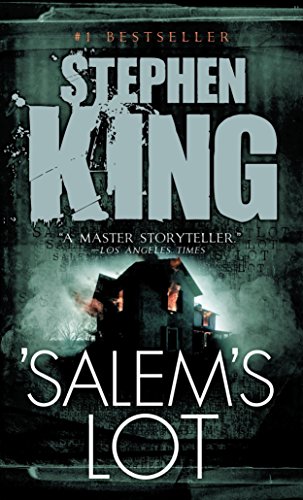 Ben Mears has returned to Jerusalem's Lot in the hopes that living in an old mansion, long the subject of town lore, will help him cast out his own devils and provide inspiration for his new book. But when two young boys venture into the woods and only one comes out alive, Mears begins to realize that there may be something sinister at work and that his hometown is under siege by forces of darkness far beyond his control.

Stephen King's second book, 'Salem's Lot (1975)--about the slow takeover of an insular hamlet called Jerusalem's Lot by a vampire patterned after Bram Stoker's Dracula--has two elements that he also uses to good effect in later novels: a small American town, usually in Maine, where people are disconnected from each other, quietly nursing their potential for evil; and a mixed bag of rational, goodhearted people, including a writer, who band together to fight that evil.

Simply taken as a contemporary vampire novel, 'Salem's Lot is great fun to read, and has been very influential in the horror genre. But it's also a sly piece of social commentary. As King said in 1983, "In 'Salem's Lot, the thing that really scared me was not vampires, but the town in the daytime, the town that was empty, knowing that there were things in closets, that there were people tucked under beds, under the concrete pilings of all those trailers. And all the time I was writing that, the Watergate hearings were pouring out of the TV.... Howard Baker kept asking, 'What I want to know is, what did you know and when did you know it?' That line haunts me, it stays in my mind.... During that time I was thinking about secrets, things that have been hidden and were being dragged out into the light." Sounds quite a bit like the idea behind his 1998 novel of a Maine hamlet haunted by unsightly secrets, Bag of Bones. --Fiona Webster

Stephen King is the author of more than fifty books, all of them worldwide bestsellers. Among his most recent are Full Dark, No Stars; Under the Dome; Just After Sunset; Duma Key; Lisey’s Story; Cell; and the concluding novels in the Dark Tower saga: Wolves of the Calla, Song of Susannah, and The Dark Tower. His acclaimed nonfiction book On Writing is also a bestseller. In 2003, he was awarded the National Book Foundation Medal for Distinguished Contribution to American Letters, and in 2007 he received the Grand Master Award from the Mystery Writers of America. He lives in Maine with his wife, novelist Tabitha King.