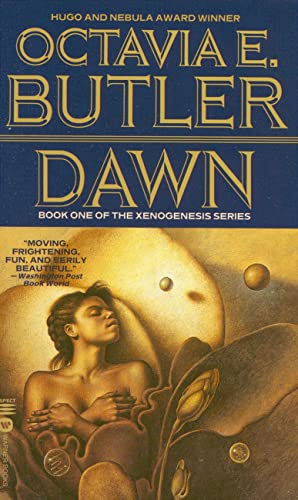 Lilith lyapo awoke from a centuries-long sleep to find herself aboard the vast spaceship of the Oankali. Creatures covered in writhing tentacles, the Oankali had saved every surviving human from a dying, ruined Earth. They healed the planet, cured cancer, increased strength, and were now ready to help Lilith lead her people back to Earth--but for a price.

In a world devastated by nuclear war with humanity on the edge of extinction, aliens finally make contact. They rescue those humans they can, keeping most survivors in suspended animation while the aliens begin the slow process of rehabilitating the planet. When Lilith Iyapo is "awakened," she finds that she has been chosen to revive her fellow humans in small groups by first preparing them to meet the utterly terrifying aliens, then training them to survive on the wilderness that the planet has become. But the aliens cannot help humanity without altering it forever. Bonded to the aliens in ways no human has ever known, Lilith tries to fight them even as her own species comes to fear and loathe her. A stunning story of invasion and alien contact by one of science fiction's finest writers.

OCTAVIA E. BUTLER was a renowned African-American writer who received a MacArthur "Genius" Grant and PEN West Lifetime Achievement Award for her body of work. She was the author of several award-winning novels including Parable of the Talents, which won the Nebula for Best Novel. Acclaimed for her lean prose, strong protagonists, and social observations in stories that range from the distant past to the far future, sales of her books have increased enormously since her death as the issues she addressed in her Afrofuturistic, feminist novels and short fiction have only become more relevant. She passed away on February 24, 2006.