Items related to Fear and Loathing in Las Vegas and Other American Stories... 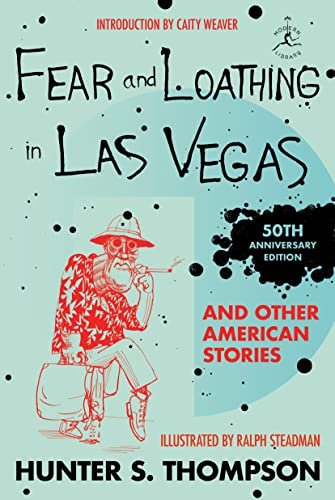 First published in Rolling Stone magazine in 1971, Fear and Loathing in Las Vegas is Hunter S. Thompson's savagely comic account of what happened to this country in the 1960s. It is told through the writer's account of an assignment he undertook with his attorney to visit Las Vegas and "check it out." The book stands as the final word on the highs and lows of that decade, one of the defining works of our time, and a stylistic and journalistic tour de force. As Christopher Lehmann-Haupt wrote in The New York Times, it has "a kind of mad, corrosive prose poetry that picks up where Norman Mailer's An American Dream left off and explores what Tom Wolfe left out."
This Modern Library edition features Ralph Steadman's original drawings and three companion pieces selected by Dr. Thompson: "Jacket Copy for Fear and Loath-
ing in Las Vegas," "Strange Rumblings in Aztlan," and "The Kentucky Derby Is Deca-
dent and Depraved."

Dr. Thompson made the list of inspirational scribes when I polled in a recent writing workshop, and why not? Back in a spiffy Modern Library edition, replete with additional essays, I find in this iconographic work that HST both invoked--and provoked--an era that was not so much the '60s proper, but rather the mean, shadow-filled death of that time, which is still playing out. Thank God Thompson was there to explode the myth of "objective" journalism and help pave the way for the pens and voices that followed.

Hunter S. Thompson (July 18, 1937 — February 20, 2005) was an American journalist and author. He was known for his flamboyant writing style, most notably deployed in Fear and Loathing in Las Vegas, which blurred the distinctions between writer and subject, fiction and nonfiction.

The best source on Thompson's writing style and personality is Thompson himself. His books include Hell's Angels: A Strange and Terrible Saga (1966), Fear and Loathing in Las Vegas: A Savage Journey to the Heart of the American Dream (1972), Fear and Loathing on the Campaign Trail '72 (1973); The Great Shark Hunt: Strange Tales from a Strange Time (1979); The Curse of Lono (1983); Generation of Swine, Gonzo Papers Vol. 2: Tales of Shame and Degradation in the 80's (1988); and Songs of the Doomed (1990).

Fear and Loathing in Las Vegas and Other American Stories Format: Hardcover