Items related to This Present Darkness 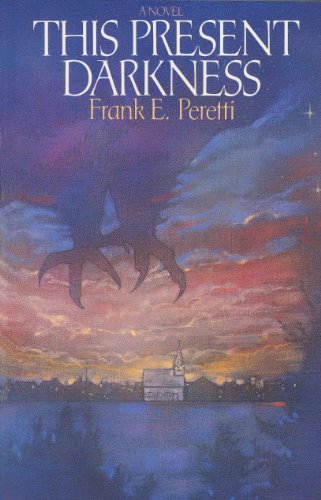 Ashton is just a typical small town. But when a skeptical reporter and a prayerful pastor begin to compare notes, they suddenly find themselves fighting a hideous New Age plot to subjugate the townspeople, and eventually the entire human race.

This Present Darkness, by Frank Peretti, is among the classic novels of the Christian thriller genre. First published in 1986, Peretti's book set a suspenseful standard in spiritual warfare story-telling that has rarely been met by his contemporaries. Set in the apparently innocent small town of Ashton, This Present Darkness follows an intrepid born-again Christian preacher and newspaper reporter as they unearth a New Age plot to take over the local community and eventually the entire world. Nearly every page of the book describes sulfur-breathing, black-winged, slobbering demons battling with tall, handsome, angelic warriors on a level of reality that is just beyond the senses. However, Christian believers and New Age demon-worshippers are able to influence unseen clashes between good and evil by the power of prayer. Peretti's violent descriptions of exorcisms are especially vivid: "There were fifteen [demons], packed into Carmen's body like crawling, superimposed maggots, boiling, writhing, a tangle of hideous arms, legs, talons, and heads." This book is not for the squeamish. But for page-turning spiritual suspense, it's hard to beat.

Frank E. Peretti is one of American Christianity's best-known authors. His novels have sold over 10 million copies, and he is widely credited with reinventing Christian fiction. He and his wife, Barbara, live in the Pacific Northwest. www.frankperetti.com.

Book Description Soft cover. Condition: New. 1st Edition. TRADE PAPERBACK EDITION - The book is in NEW & UNREAD condition, BUT HAS TONING TO EXPOSED PAGE EDGES - OTHERWISE, no flaws or defects - SOFT COVER IN PICTORIAL WRAPS as issued. THIS IS AN INTRODUCTORY PRICE FOR OUR GRAND RE-OPENING. ALL PRICES WILL BE ADJUSTED LATER TO REFLECT MARKET PRICES. ALL BOOKS HAVE BEEN BOXED IN CLIMATE CONTROLLED STORAGE AND HAVE NOT BEEN TOUCHED BY ANY OTHER HUMAN THAN ME FOR AT LEAST THE LAST 10 YEARS - ALL BOOKS ARE SEALED AND BUBBLE WRAPPED AND SHIPPED IN BOXES - YOU CAN BUY HERE WITH CONFIDENCE KNOWING THAT A BUNCH OF RANDOM PEOPLE HAVE NOT TOUCHED YOUR BOOK - WE ALSO ACCEPT OFFERS ON OUR BOOKS, BECAUSE WE WANT TO HELP DURING THIS LOCKDOWN WHERE WE ARE PRACTICING SOCIAL DISTANTCING -. Seller Inventory # 005672