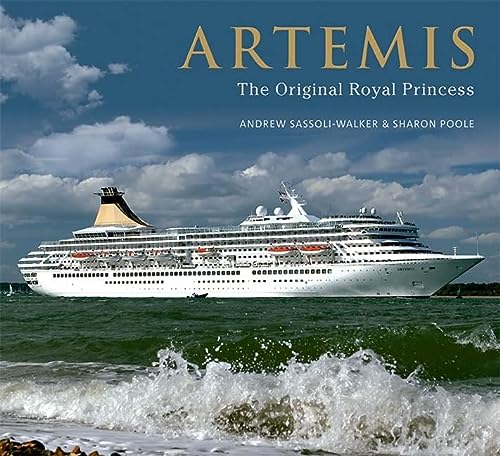 When Royal Princess was named in Southampton by HRH The Princess of Wales in November 1984, she was the most advanced purpose-built luxury cruise ship ever conceived and constructed. Built at the beginning of the modern commercial age of cruising, she was the trend-setter of the cruise ship world and continues to hold a number of records, among them, the first contemporary cruise ship to have all outside cabins, and in 2010 as Artemis, the first British passenger ship to be commanded by a female captain, Sarah Breton. In the following years of service, she has taken passengers all over the globe in luxury and style, and it is hoped she has many more years of cruising ahead of her. At 45,000 gross tons she is small in comparison with the super-liners of today, but when launched she was one of the largest cruise ships afloat. Her traditional ambiance and service standards have attracted a loyal following, not only among passengers, but also among her crew. This book, written by Andrew Sassoli-Walker and Sharon Poole, celebrates the innovation in cruise ship design that Royal Princess / Artemis represented, and highlights her career with both Princess and P&O Cruises in the words of both passengers and crew. Fully illustrated throughout with many never-before-seen colour images, it is a tribute to a unique and much-loved vessel.

About the Author:
Andrew works in the shipping industry, and has done for the last twenty-three years. He is a keen photographer, which has resulted in becoming a freelance professional in addition to his shipping career. He has had numerous commissions from the shipping industry and has won a few competitions including one held by P&O Cruises. Has had photos published in maritime books. He is a keen traveller especially on cruise ships, and has been interested in them since childhood.Sharon has been writing/compiling local history and maritime history books since 1987. In her spare time she is a keen photographer and a contributor to photo libraries. She is also a keen traveller on cruise ships and has been a collector of merchant maritime memorabilia for over forty years.

Shipping: US$ 26.97
From United Kingdom to U.S.A.
Destination, rates & speeds