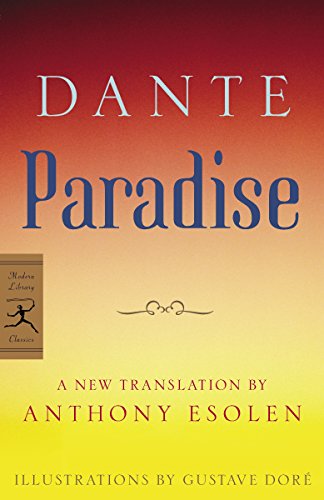 “If there is any justice in the world of books, [Esolen’s] will be the standard Dante . . . for some time to come.”–Robert Royal, Crisis

In this, the concluding volume of The Divine Comedy, Dante ascends from the devastation of the Inferno and the trials of Purgatory. Led by his beloved Beatrice, he enters Paradise, to profess his faith, hope, and love before the Heavenly court. Completed shortly before his death, Paradise is the volume that perhaps best expresses Dante’s spiritual philosophy about resurrection, redemption, and the nature of divinity. It also affords modern-day readers a clear window into late medieval perceptions about faith. A bilingual text, classic illustrations by Gustave Doré, an appendix that reproduces Dante’s key sources, and other features make this the definitive edition of Dante’s ultimate masterwork.

The Divine Comedy is a complete scale of the depths and heights of human emotion," wrote T.S. Eliot. "The last canto of the Paradiso is to my thinking the highest point that poetry has ever reached or ever can reach."
The Divine Comedy stands as one of the towering creations of world literature, and its climactic section, the Paradiso, is perhaps the most ambitious poetic attempt ever made to represent the merging of individual destiny with universal order. Having passed through Hell and Purgatory, Dante is led by his beloved Beatrice to the upper sphere of Paradise, wherein lie the sublime truths of Divine will and eternal salvation, to at last experience a rapturous vision of God.
"A spectacular achievement," said poet and critic Archibald MacLeish of John Ciardi's version of Dante's masterpiece. "A text with the clarity and sobriety of a first-rate prose translation which at the same time suggests in powerful and unmistakable ways the run and rhythm of the great original."

Anthony Esolen is a professor of English at Providence College. He is the author of Peppers, a book of poetry, and his translations include Lucretius’s De rerum natura and Torquato Tasso’s Gerusalemme liberata, along with Dante’s Inferno and Purgatory, published by the Modern Library.

Dante Alighieri was born in Florence in 1256. He entered public life in 1295, later becoming one of the six governing magistrates of Florence. He repeatedly opposed the machinations of Pope Boniface VIII, who was attempting to place all of Tuscany under Papal rule, and in 1301 was banished from Florence. Dante would never again enter his native city, spending his remaining years with a series of patrons in various Italian courts. He completed The Divine Comedy shortly before his death in 1321. Gustave Doré (1832-83) was one of the most popular and prolific French illustrators of the mid 19th century.